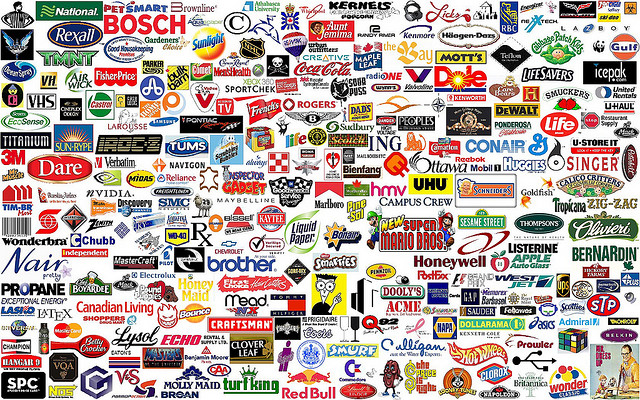 An angel may not get its wings, but somewhere, a click sells a product, downloads a white paper, or takes some personal information. In short, some exchange of value takes place — at huge, mind-boggling scale.

Larry Kim of the web marketing firm WordStream analyzed a huge divot of Google data — which I published in infographic form earlier today. WordStream offers a free Adwords Performance Grader, which gave it access, Kim told me, to about 1 percent of Google’s revenue over the past quarter.

And the data that comes out is fascinating. 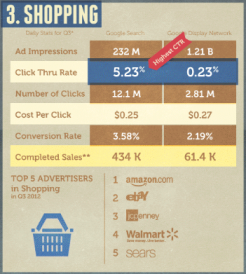 Above: The shopping industry does a lot of ad shopping

For instance, the finance industry places 617 million ads on Google.com and 5.32 billion ads on Google’s ad network each and every day, generating 28 million clicks at the highest average cost per click of any industry: over $3 on google.com, and over $1 for ads in the network. Top five advertisers in finance include names like State Farm, Geico, and Quicken Loans.

The second most prolific industry buying Google ads is travel, where brands like Expedia, Hotels.com, and Kayak place 2.5 billion ads a day to generate over 20 million clicks at an average price of just under $0.30, and complete 360,000 sales a day.

“Different advertisers define conversions differently,” Kim told me today, so those sales include not just actual flight, rental car, and hotel bookings but also any leads generated via an ad.

But the highest conversion rates belong to the education industry, which enjoys almost three times the conversion rate of travel companies. Education advertisers such as the University of Phoenix, DeVry, and Kaplan University convert at a red-hot 6.27 percent.

All those millions of click and hundreds of thousands of conversions come out of probably the biggest advertising engine in the history of the world. Between ads on its own site and ads on its network, Google delivers an astounding 29.8 billion ad impressions every single day. That’s mind-boggling.

The good news for advertisers is that Kim’s data shows that average cost-per-click has come down significantly, which is part of the reason why Google lost almost $20 billion in market value in a single morning last week. Advertisers are now paying between 16 percent and 18 percent less for clicks than they did just four months ago. 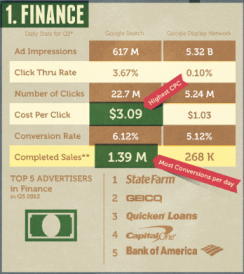 Above: The finance industry spends a lot of green with Google

“I think that’s fantastic news,” Kim says.” “It’s not only cost-per-click going down, but also that the inventory of ad impressions is going up substantialy … it means you can get more customers for less money.”

That sounds bad for Google. But not really, he told me.

“It’s actually really good news for Google, too … even though Wall Street cheers when the cost-per-click goes up and Google gets more money from advertisers … that’s not sustainable. By increasing the available impressions and clicks and lowering the costs, more advertisers will see more value from online advertising and that will be beneficial for Google in the long run.”

One caveat: While Kim is pretty confident in the data, saying that by analyzing 1 percent of Google’s revenue he’s checking a far higher percentage than Gallup, for instance, would poll for an election preview, it’s not Google data.

So it’s possible that WordStream’s data is off. With such a large sample, however — over a billion dollars in annualized revenue — it’s not likely that it is very far wrong.