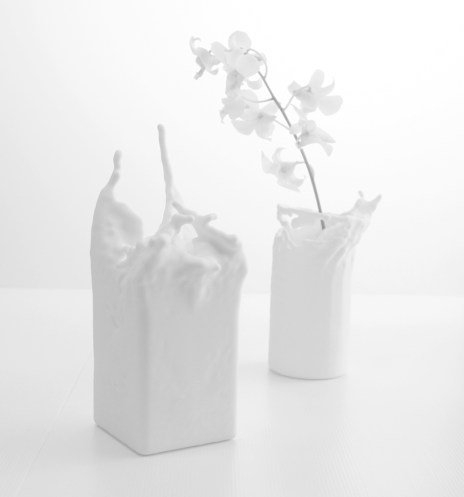 We have all spent a wasted day shopping, or worse, regretting our purchases. You often can’t find a pair of jeans that fit perfectly or a lamp that matches the fuchsia stripes on your wall. Wouldn’t it be great if you could get exactly the product you want?

Mass customization, as spearheaded by companies like T-shirt makers Threadless, offers the promise of personalized products, manufactured on demand. 3D printing is one technique that could allow consumers to create exactly the objects they want from jewelry and shoes to homeware (like the fluid vase pictured) and gadget accessories.

2010 was the year that 3D printing technology first appeared on my radar as a tech journalist. As we end the year, I asked some 3D printing companies for their views on the current status of the industry and what’s coming next. Scuplteo, Ponoko and i.Materialise all let consumers design, or co-design, and print their own objects. Ponoko also adds the option of embedding electronics like sensors and LEDs into printed objects. Pre-launch startup Blueprinter is developing a high-grade, easy-to-use and inexpensive 3D printer.

What is 3D printing?

A 3D printer creates a three-dimensional object by laying down successive layers of material. A 3D design file defines a series of cross-sectional slices, which are then printed one on top of one other to create the 3D object. Objects can be printed in different materials from plastic to metals and in various sizes depending on the capacity of the printer. Anything from jewelry to furniture can be created in a 3D printer, a process illustrated in the animation below. (“Fully Printed” from design studio Nueveojos)

Consumer 3D printing companies like Scuplteo, Ponoko and i.materialise are at the vanguard of a trend towards democratizing physical production in the same way that web technology has allowed millions of people to create and share digital content like videos. Giving users without 3D design skills the ability to manufacture their own objects could unleash a similar burst of creativity in consumers. Derek Elley from Ponoko told me that “It’s important to understand that this movement is not about any one ‘digital making’ technology like 3D printing or laser cutting. This movement is about individualized goods for you and me.”

Elley predicts that in the future you will customize a digital product online for manufacture in your home, your office or a retail store. This means no more physical shipping of products from the other side of the world. Products would be made locally, on demand, just in time and just for you. Joris Peels from i.materialise also speculated that in some niche areas where speed is essential, technologies like 3D printing will cause some manufacturing to move from the developing world back to the first world.

Elley explained that the entire 3D printing market (sales of machines, materials and services) is currently worth about $1B annually. By comparison, the “digital manufacture” market brings in over $30B. In his opinion, wider usage of 3D printing is not the result of advances in the printers themselves (the technologies have already been around for 20 years), but in 3D printing software, which is becoming more accessible and easy to use.

Peels says that 3D printing is moving from being a technology that lets marketers and engineers create prototypes, to one that is used broadly for the production of final products. Clément Moreau, CEO of Sculpteo, seconds this and adds that the materials used for 3D printing have improved to the stage where they can be used to not only create prototypes but functional and aesthetically pleasing objects. On the other hand Lars Scharf, the founder of Blueprinter, contends that 3D printing is still mainly a powerful but complicated and expensive technology reserved for the few.

Peels told me that “every industry that makes a product that comes into direct contact with a human being will be disrupted by 3D printing. The only exception I can think of right now is clothing. If you use 3D printing for prototypes you will simply be able to go to market faster. If you use it in your end products, it might be expensive at the moment, but you will be more flexible.”

Elley says that the most immediate problem is the cost required to achieve a quality finish. This is why 3D printing is still used mostly as a prototyping tool. But he argues that when printing is combined with other making and finishing processes, stunning consumer-ready products of any size can be produced at the right price.

3D printers are still too expensive, slow and unreliable according to Peels. They need to become considerably more efficient in order to significantly reduce the cost of making things. Machine reliability is one of the key factors keeping costs high. Scharf agrees. “Small and medium-sized companies do simply not do 3D prints or do only very limited 3D printing through specialized third-party suppliers. That will change. Current technologies include sensitive and expensive lasers, advanced heating equipment and chemical treatment processes.”

Peels says that i.materialise can currently print objects up to 2m by 80cm, but it would cost between 8,000 and 20,000 EUR to print an object of this size. So the biggest challenge is cost, rather than size. There are other problems though. “Does everyone really want to design? I call this the Singer problem. People will tell you we will all have 3D printers on our desks, they will be cheap and we will use them to make anything we want. But we can already do this with clothing using sewing machines, yet precious few people actually do this.” says Peels.

What’s next for 3D printing?

Moreau expects that “we will see new techniques to 3D print objects in metal and even precious metals like gold and silver. This will have amazing appeal for the mass market. On the other hand, we will see some very cheap ways to 3D print objects, leveraging largely available and affordable materials like plastic and paper.”

Peels foresees more medical applications, which could even include 3D printing replacement parts for people. “Initially it will be jaws and bones that will be replaced by metal but later on human tissue and bone will be grown and then 3D printed commercially,” he says.

Peels and Elley both predict that 3D printing will eventually be replaced by voxelfabbing. A voxel is a “3D pixel” whose physical equivalent would be a tiny, 3D component something like a lego block. Some voxels could be magnetic, conduct electricity or have other physical properties, and they can be made from different materials. An object created by a voxelfab could theoretically only allow light to pass through from one direction, be hard in certain areas and soft in others, magnetic to varying degrees, etc. Voxelfab researchers have even tested a bonding agent for the voxels that could be dissolved when a product reached the end of its life cycle. This would allow the voxels to be reused for an entirely different product.

Finally, Peels expects 3D printing to get mainstream media attention over the coming two years. “We are close to seeing Homes and Gardens tips on how to decorate with 3D printing.”