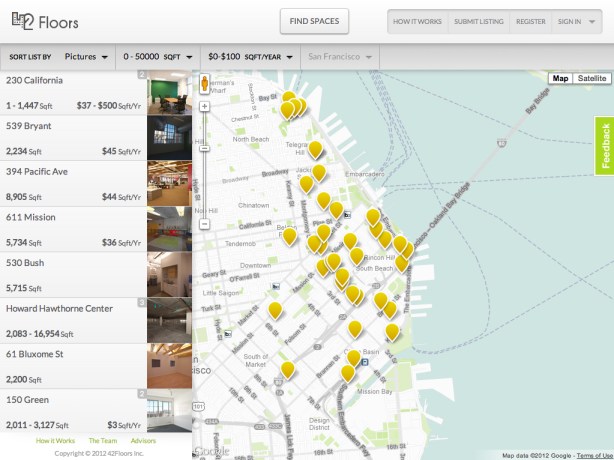 Zillow, Redfin, Trulia: all familiar names to anyone who’s looked for a home lately. But where in this digital landscape would you go to look for office space?

But could it really have taken five to seven years for office space search to finally be optimized by the Internet?

Yes, says 42Floors co-founder Jason Freedman, who blames the commercial real estate industry’s lack of a consumer focus and reliance on hapless brokers for keeping the opportunity at bay for so long. It’s hard to believe, but in an era when software is eating the world, it hasn’t yet taken a bite out of this $11 trillion industry, which has a poorly executed presence on the web.

In classic Silicon Valley—and Y Combinator—fashion, Freedman insists that 42Floors is strictly a technology company saving an industry that’s anything but. Industry data providers still rely on thousands of cold-callers to gather information; brokers base their livelihoods on faxes, paper fliers, and hastily assembled spreadsheets. “It’s the single most inefficient process you can dream of, and it’s going to all be replaced by software,” he proudly exclaims.

It all started when Freedman and his team (formerly of Y Combinator-backed startup FlightCaster; acquired in 2010), were looking for office space for their next startup, but became aggravated by the outmoded process that was office space search. Lacking a broker’s license to sift through listings, they were at the mercy of other brokers who were operating as if the Internet didn’t exist. Craigslist was a letdown as well, with most listings severely out of date and brokers on there engaging in bait-and-switch tactics.

The only companies that had relevant online listings were giants left over from the last dot-com boom, namely LoopNet and CoStar, many of their listings lack quality photos and data. The interface is a bit cluttered as well, lacking the minimalism and modernity of 42Floors. While browsing LoopNet is free, being able to use the site professionally (for brokers) requires an expensive subscription. Surprisingly, brokers had become complacent with that subscription and overall model.

This is also why, according to Freedman, the residential search startups took off earlier, since the data in that market was spread out over several competing listing systems that weren’t as locked-in and monopolized.

The co-founder became so enamored by the prospect of shattering the old system and conveniently finding his dream office that he took the requisite courses to get himself licensed as a full broker. Within months, he and his team had dissected the industry and built a website that would make finding office space transparent and direct for tenants.

While making the marketplace more efficient may be synonymous with killing the middlemen (in this case brokers), that’s not necessarily true. The company has been working with several large brokerages to replace their internal systems so they can feed data into 42Floors much more fluidly. “Brokers don’t need to go away, but the data needs to be liberated,” says Freedman, who sees the role of brokers evolving to be more of a consultant and negotiator.

To be clear, 42Floors is not serving the market for buying commercial properties. This is strictly about direct-to-tenant office space leases, although it will grow at some point to all types of commercial leases. 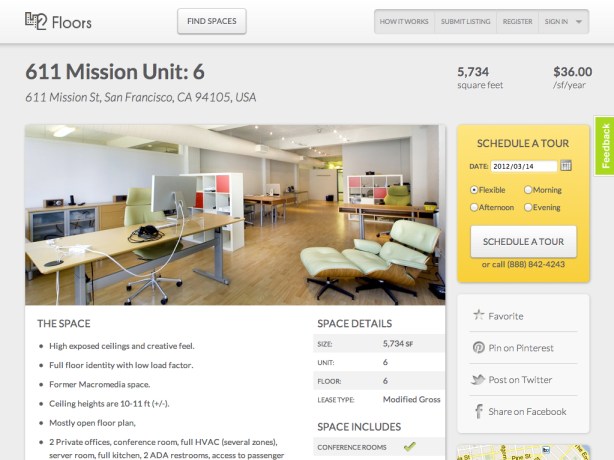 42Floors takes many design cues from the more established residential search sites, with a few enhancements. For one, their own professional photographers take all listing photos. Once on the site, the photos are joined by beautifully displayed data. The interface is extremely minimal and uncluttered. This really is one of the better listing sites you’ve seen. The site relies heavily on the Ken Burns effect, where still-photos are gradually panned and zoomed through a steadily paced slideshow. Freedman insists this is much better than 360-degree views for showcasing office space, and I’d have to agree.

A videography feature will debut later this year, but photography is the more sensible option for a majority of spaces, Freedman says. In fact, 42Floors is currently working on a mobile application (set to debut within the next quarter) that will allow brokers and landlords to take photos with their smartphones and upload them to the service directly. This is an interesting angle for the company and it will be worth observing how the trend plays out.

While all these innovations enhance the browsing and discovery of office space, the company will not be touching the transaction process at all. Once a company finds a space they like, 42Floors will refer a broker and then collect a 20 percent commission if the deal goes through.

In fact, this referral fee will be the primary business model once several quarters of growth have gotten the startup on steady footing. However, it will always be free to both browse and list space. The goal is for 42Floors to generate value by lubricating the market, reducing friction by making it free to list and view beautiful office spaces.

The company also plans to open a marketplace of services to help round out the creation of a dream office, with design and furnishing vendors on the list of eventual offerings.

The service is currently limited to the San Francisco Bay Area, where a panoply of office-hungry startups serve as a great testing ground for beta testing.

This will be the second time this team of entrepreneurs goes through the Y Combinator program, which they say was a “no-brainer,” citing loyalty to the program as the main motivator. In addition to all the important business insights gleaned from the startup boot camp, Freedman and co. insist that the real value is in the community, the people and the attitude. They could have raised more money from larger institutional names but were drawn to Paul Graham, the head of Y Combinator, who Freedman likens to a hard-charging college coach that “you just want to perform for.” Their own peers from the current batch of startups have voted them #1 in their group.

The company has so far raised $400,000 from Y Combinator, Start Fund, and a follow-on from SV Angel.

My parting thought on 42Floors is that it truly is astonishing how a direct-to-tenant modern web service for finding office space wasn’t done yet, and that launching as a startup for startups is a great play here. Just as AngelList has become the go-to social network for startups looking to fundraise, helping entrepreneurs make connections and fall back on the community during that difficult process, 42Floors can be the go-to social hub for startups looking to do the same around the office-space dynamic.

It’s also a great content-marketing angle for 42Floors to play: showcase hot startup office spaces, galvanize the community, promote their own service, and build an audience with authentic engagement. It may seem cliché, but we just haven’t seen this paradigm around physical startup spaces yet.