4K Ultra HD televisions are expected to double sales to 15 million units in the U.S. in 2016, and the next-generation TVs are now being adopted at a faster rate than predecessor high-definition TVs. Sales of 4K Ultra HD Blu-ray players are also selling at a fast rate, according to Gary Shapiro, CEO of the Consumer Technology Association, the big tech lobbying group.

“Consumers are showing a strong preference for 4K,” which has four times as many on-screen pixels as HDTVs, Shapiro said. “It’s faster and more robust than HDTV.”

More than 700,000 4K Blu-ray players have been sold so far in 2016, Shapiro said. Blu-ray is now 10 years old as a technology, launched in support of HDTV content. Now all of the major studios are releasing content on the 4K UHD format. Netflix is also streaming movies in 4K formats online. More than 500,000 4K Blu-ray discs have been sold so far, according to the Digital Entertainment Group. 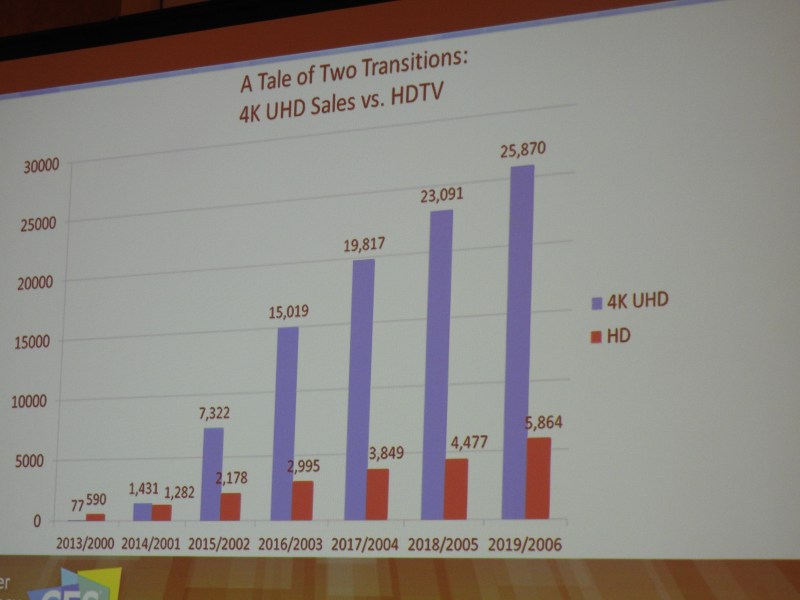 Above: 4K UltraHD TVs are outpacing the rate of adoption of HDTVs.

Shapiro said that 4 out of 10 TVs that ship this year will be 4K UltraHD, so sales of HDTVs remain strong as well. Almost every TV set over 50 inches diagonal is a 4K set, Shapiro said.

Meanwhile, prices are dropping. The average 4K TV price in 2015 was $1,048, and that is dropping to $861 in 2016. Shapiro said that the new ATSC 3.0 television standard is being finalized for 4K transmission over Internet Protocol and on mobile devices, and he expects to see TVs that use the standard at the Consumer Electronics Show in early 2017.

The Consumer Technology Association, which puts on CES every year, expects to have about 3,800 exhibitors at CES 2017, which takes place January 5-8 in Las Vegas. About 165,000 attendees are expected from 150 countries. About 6,500 media are expected. 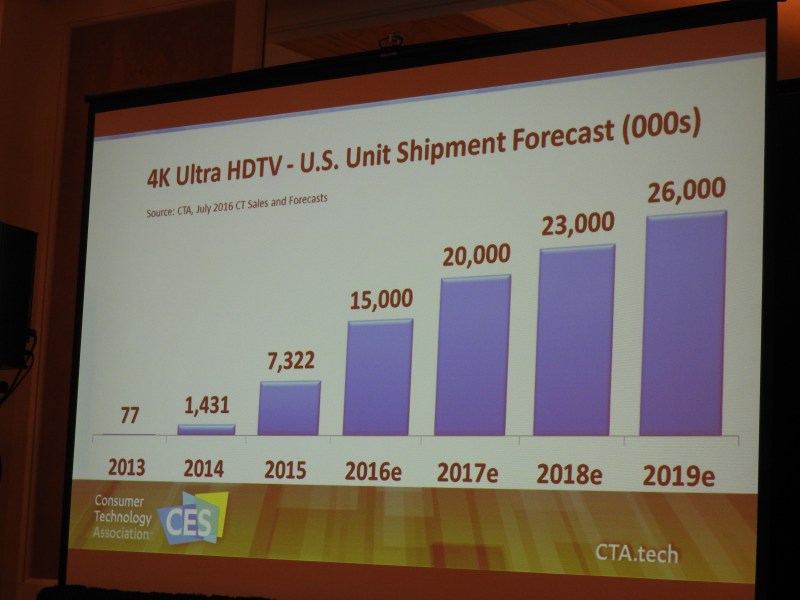