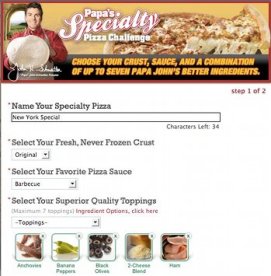 Editor’s note: This story is part of our Microsoft-sponsored series on cutting-edge innovation. Dave Sloan is CEO of co-creation platform company Treehouse Logic.

“Customer co-creation,” the practice of allowing customers to “build their own” products, is gaining quite a bit of traction among US online retailers. For example, custom messenger-bag maker Rickshaw Bagworks lets each customer design their own bag before it is made to order, and sportswear vendor Shortomatic lets shoppers upload images and overlay them on a pair of custom-designed swim trunks.

Many e-commerce leaders — Nike, Dell.com, and Blue Nile, for example — have begun combining customer co-creation with social media tools to let customers share what they’ve created across social networks. The goal of co-creation is to allow customers to specify exactly what they want while engaging them an interactive building experience.  Sharing (“look what I built!”) is a natural extension of that co-creation process. Call it “social co-creation”.

Despite the global financial crisis “US online retail … managed to grow 11% in 2009 to reach $155.2 billion,” Forrester Research reported a few months ago. The research firm also predicts US online retail will see a 10% compound annual growth rate and that sales will reach $248.7 billion by 2014. I expect social co-creation to play a significant roll in fueling that growth.

Here are 5 signs that social co-creation is a trend to watch.

Nike was one of the first to offer a highly visual “build your own shoe” app on its website.  For fiscal year 2010, Nike announced “an increase in web sales of 25% to about $260 million from about $208 million in fiscal 2009. NikeiD, the online custom-design app, surpassed $100 million for the first time.”

To Nike, customization and social media are strategic revenue generators. Nike offers both online sharing options and in-store kiosks that allow you how to create and post your shoe design online (you can see a video of the process here). 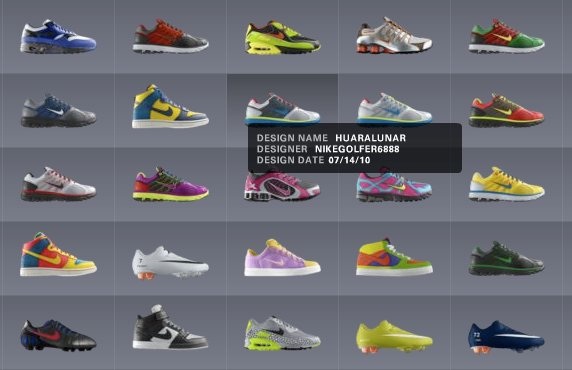 Zazzle, for example, has grown 1,600% in traffic and 900% in sales in the past four years, as revealed at the MIT Smart Customization seminar in May, 2010.

CafePress, a popular custom T-shirt  and gift site, claims 11 million unique visits per month, approximately 2,000 independent shops added each day, and over 250 million unique products available on the site.  And, of course, each custom creation includes a Facebook, Twitter, and email icon to encourage social sharing.

[Update: CafePress competitor Zazzle reports that it has 20 million unique visitors per month, 31 billion unique products available, and has grown 1,600% in traffic and 900% in sales in the past four years, as revealed at the MIT Smart Customization seminar in May, 2010.]

3. Blue Nile has its best first quarter ever

Highly configurable big-ticket items like diamond rings and cars are perfect candidates for online customization, because the purchasing process demands visualization, extensive research, and experimentation with combinations of features and price.

Blue Nile is the leader in the popular “build your own ring” space.  For Q110, “Blue Nile net sales increased 18.7% to $74.1 million, the highest first-quarter sales level in the company’s history.”  Other popular custom ring sites include Brilliant Earth and Gemvara.  After shoppers build a ring to their liking, they can share their creation before they decide to buy.

Papa John’s Facebook page has over 1.1 million “likes,” and the Papa’s Specialty Pizza Challenge contest drew over 12,000 entries. Facebook users were able to select pizza toppings to conceive a custom pizza, then name their creation and post it to their profile.  Three lucky winners had their creative recipe featured at a Papa John’s pizzeria.

5. The emergence of co-creation startups

Enterprise companies are not the only ones capitalizing on the co-creation trend. Many startups have recently launched in specific verticals like dress shirts (Blank-label, Shirtsmyway, ProperCloth), chocolate bars (Chocri, Chocomize), jewelry (GemKitty, Delusha, ArtofJewels), and granola (MixMyGranola, MeandGoji).  The sheer number of new mass customizer startups on the scene reinforces the theory that customers are increasingly demanding the ability to create their own products.

Mass customization also attracts a highly desirable consumer. Forrester research maintains that these consumers could be your most important customers. A whopping 81% are willing to pay more for customized products. And research Forrester did in 2007 showed 54% of custom product buyers consider themselves leaders, compared with 36% of all online shoppers, which means that they are most likely to tell others about products that interest them.

So where is this trend heading?

In the next 2 years we’ll see the maturing of social co-creation. Not only will more vendors want to launch build-your-own experiences, they’ll want to launch fantastic build-your-own experiences.  Entrants to this market will look for ways to enhance the user experience by optimizing performance, integrating social media campaigns, including rich product visualization (zoom, alt images, videos), adding creative suggestions to aid the design experience, and including recommendations/color matches to aid the decision process. Additionally, these companies will offer customization of their product not only on their websites, but also on their Facebook pages.

Another trend in social co-creation is mobile. The iPhone and iPad, for example, offer even greater levels of personalization and interaction than standard web browsers. Mobile has the greatest opportunity to extend social co-creation because it offers additional functionality like location (GPS), multi-touch and cameras. It’s no coincidence that “More Cupcakes!,” an iPhone game that lets users build and share custom cupcakes, has been a top download in the App Store for the past few months.

The real killer app in the social co-creation space is fun. How do you make shopping fun? Fun is when the design-your-own experience is playful like a video game. Fun digital experiences are zippy, colorful, intuitive and social.

More and more companies will capitalize on the increasing demand for more interactive, fun, social online shopping experiences that tap into customers’ creativity.  Companies that offer design tools to enhance the product experience will generate buzz around their brand and grow the e-commerce market.

Weigh in on how big of a market you think co-creation with be in the poll below.

How big of a market will co-creation be?customer surveys

Dave Sloan is CEO of Treehouse Logic, which offers a hosted design tool solution that enables customer co-creation. You can reach Dave at dave@treehouselogic.com and follow him at www.twitter.com/treehouselogic.

To read more recent stories in this series, visit the Conversations on Innovation site, or click on the headlines below:

The future of email: from conversations to decisions
Overcoming information overload?
The subscription economy is here. Are you ready?
As new phones emerge, mobile app development is a moving target
A future of full of touchscreens? It’s all in the software
Cleantech’s next generation: smaller, nimbler, smarter
How JavaScript will lead the way to open video
TV 2.0: Hulu’s flatlining, and the networks are ready to innovate
What will it take to make mobile payments mainstream in the US?