No longer the only Wi-Fi audio game in town, Sonos now faces stiff competition from consumer audio heavyweight Denon and its HEOS range of Wi-Fi speakers.

Denon isn’t the first company to take a shot at Sonos’s crown – competitors now include LG, Samsung, and Bose – but it’s the most recent and possibly the most serious threat, given its stellar reputation in the home audio world.

HEOS is Denon’s line of home Wi-Fi audio gear that launched earlier this year and closely mirrors the Sonos approach of embedding Wi-Fi-capable independent systems within powered speaker units, all controlled via a free app for iOS or Android.

If you’re familiar with the Sonos product line, you’ll get a serious case of déjà-vu looking at the HEOS offering. Price for price and product for product, the core product offering is nearly identical. 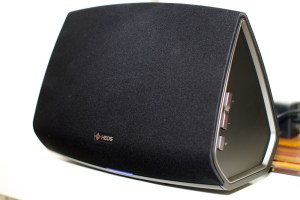 Here’s how it looks:

Let’s take a look at how these two systems compare:

In the past, Sonos required you to buy its Bridge, a small, inexpensive device that connects directly to your home’s router and forms the first element in the proprietary SonosNet Wi-Fi network. (Alternatively, you could also plug Sonos speakers directly into your router.)

As of last month however, Sonos no longer requires a Bridge — speakers can now be connected directly to Wi-Fi. With a Bridge installed, setting up a Sonos speaker is ridiculously easy. Simply fire up the app, choose to add a speaker, press the play/pause and volume button simultaneously on the new speaker, and you’re done. Without the Bridge, set-up is a bit more complex … but only for the first speaker you add, since it will have to be configured to speak to your Wi-Fi network. All additional speakers follow the same set-up as the ‘with Bridge’ arrangement.

Above: The HEOS set-up on the left must be done each time a new speaker is added. The Sonos set-up (right) is much simpler.

Just as with a Sonos non-Bridge set-up, you’ll need to configure HEOS to speak to your Wi-Fi network. This is done using the free app on any iOS or Android device that has a headphone jack (which is pretty much ever device, as far as I know).

You plug one end of the included mini-jack patch cord into your phone/tablet and the other into the HEOS unit’s AUX jack located in the back. Following the instructions as the app gives them, you then press the Connect button on the back of the HEOS speaker to begin the configuration process. I found that this could take anywhere between 30 seconds to 2 minutes. You must repeat this process for every new HEOS unit you want to add. It’s time consuming, though not difficult. But it isn’t as smooth or as fast as the Sonos set-up.

The Sonos system is minimalist in terms of additional connections. The Play:1 and Play:3 possess only Ethernet ports and standard speaker-mount threaded inserts, while the Play:5 adds a line-in and headphone mini-jack ports and a second Ethernet port. This means if you opt for a Sonos setup that only includes Play:1 and Play:3 speakers, you won’t have the ability to add an external sound source, e.g., a friend’s phone or iPod. 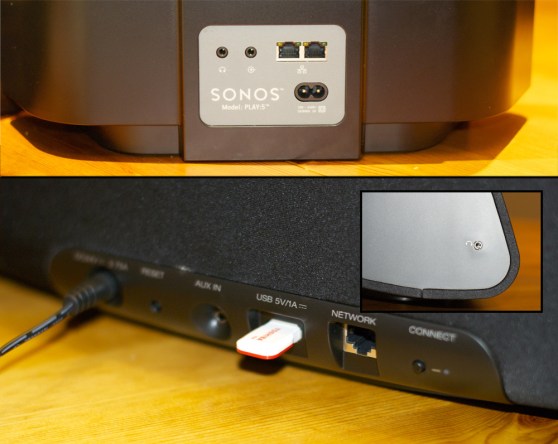 Above: The Sonos Play:5 (above) has the most inputs of any Sonos speaker. All HEOS speakers have the same ports except for the HEOS 7 (below and inset) which offers a headphone jack as well.

The HEOS, on the other hand, uses a consistent set of inputs on the back of all of their components, which include: one Ethernet port, one AUX mini-jack and one USB port. Only the range-topping HEOS 7 offers a headphone jack.

It’s worth noting that Sonos Ethernet jacks can be used as an extension of its wireless network, letting you plug in any Ethernet-equipped device for Internet access. That’s a neat feature, given that these products are all about the music.

Anything as subjective as the look of a product will always be difficult to judge on an empirical basis, but here’s how the two systems stack up: both are available in black or white, which should give them equal standing as far as home décor goes.

Sonos favors a minimalist design with a solid build and strong metal non-removable grilles. Button placement and design are consistent and easy to access, with the sole indicator light a tiny LED placed between the volume and play/pause buttons.

Above: Which looks better (HEOS on the left Vs. Sonos on the right) will come down to taste.

Denon’s HEOS has a more whimsical look and feel, with speaker grilles that are non-removable cloth-wrapped plastic. Volume and mute buttons appear on the top of the HEOS 3 and the sides of the HEOS 5 & 7. The HEOS indicator light is built into the bottom of the units and glows a pleasing blue color when the unit is connected and operating.

All Sonos units have built-in power adapters, so your only concern is how to run the single, color-matched power cord. The HEOS units, however, all use external (brick) adapters, with the HEOS 3 using a wall-wart variety. I’m not a fan of external adapters, and Sonos earns solid marks for doing away with them. 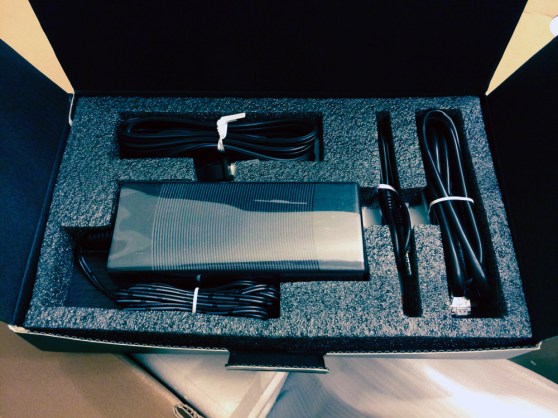 Above: Every HEOS speaker comes with some form of external power adapter.

This might already create problems for people who want to control their music from a computer — it’s simply not an option for HEOS. On the other hand, any iOS device that can’t run iOS 6+ isn’t invited to the Sonos party (sorry first-gen iPad).

How about music sources?

HEOS proves more flexible in terms of local sources, but when it comes to online music services, Sonos comes out way ahead. 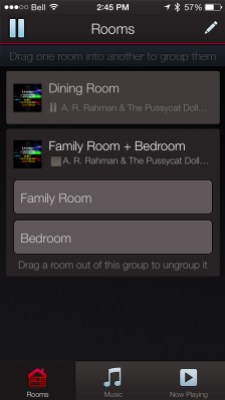 Above: The HEOS app does a good job letting you drag and drop speaker to rearrange their groups.

The DLNA (a universal streaming media standard) requirement for HEOS could prove an annoyance for some users. Macs for instance, don’t come equipped with a DLNA server, so you’ll need to install one. Not all NAS devices implement DLNA in a way that HEOS likes; you’ll need to check their compatibility list. Sonos meanwhile, is the king of connectivity and can easily access any music in your network regardless of DLNA compatibility.

Both systems let you stream music to each speaker independently, or you can group as many speakers as you like into a single zone where all speakers play in perfect sync, with the HEOS app offering a friendly drag-and-drop method for configuring zones.

Both systems let you access speaker volumes and EQ (treble and bass only), though only Sonos gives you a Loudness setting.

Both systems do a good job of displaying album art, but the Sonos renders this art faster when music is viewed as a list.

With Sonos, you can pair any two Sonos speakers to form a left and right channel stereo setup. HEOS only lets you do this with the HEOS 3 speakers.

Overall navigation on both apps takes some getting used to, with Sonos feeling a tad faster and more responsive. HEOS employs a three-tabs design that give you quick access to Rooms, Music, and Now Playing, while the Sonos app uses tap-able labels (e.g., tapping on the name of the current room takes you to the Rooms screen). It’s hard to say which is better. If I prefer the Sonos layout it’s probably because I’m more familiar with it. 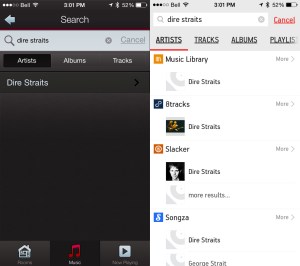 Above: HEOS (left) can only return search results based on the source you’ve selected. Sonos (right) can search them all.

One area where Sonos really dominates is with its global search function. This lets you find matches on a plethora of criteria such as artists, albums, tracks, playlists, etc. not just against the music on your network or your device, but on every online service that you’re subscribed to. HEOS has a search function too, but it is limited to matching only album, artist, and track and – more importantly – can only search the music on your network and only one source at a time. There is no support for searching online music sources.

Sonos has always described themselves as a software company, and it shows.

Of course the big question is … which sounds better?

It’s not as easy to answer this as you might think. At first glance, based on how HEOS has set up their speaker line to coincide with the Sonos models, it’s tempting to match up the HEOS 3 with the Play:1, the HEOS 5 with the Play:3 and the HEOS 7 with the Play:5. At first, that’s exactly what I did, with the result being that the HEOS units trounced their Sonos rivals. Each HEOS speaker performed significantly better in every describable way.

But that’s not the right way to compare these products, because from a technical point of view, that’s not how they line up. Time for another table!

You can’t expect a three-driver, three-amp speaker to sound as good as one with five drivers and five amps. So comparing a Play:3 to a HEOS 5 simply doesn’t work. You’re paying $100 more for the HEOS 5 and you can tell right away. Likewise, the 7-driver 5-amp $599 HEOS 7 outclasses the 5-driver, 5-amp $399 Play:5. There’s a huge difference in how these two speakers sound. 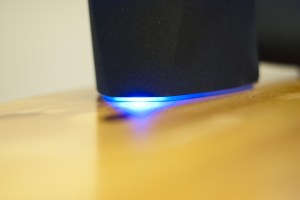 Above: The blue glow of the HEOS’s indicator light can be mesmerizing

So what to do?

What I can say is that, for the price and to my ears, each of these speakers sounds terrific. The HEOS speakers do possess a slightly warmer tone than the Sonos, though not by a significant amount, and when two similar units like the HEOS 5 and the Play:5 are compared, the HEOS offers slightly lower bass. 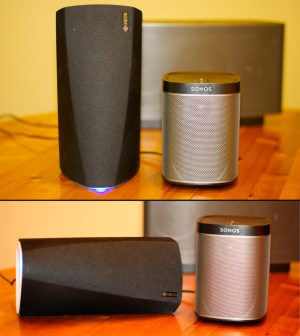 Above: Is the HEOS 3’s bold looks, extra inputs and horizontal placement option worth $100 more than the Play:1?

The Play:1 for its part, feels like a better value at $199 than the $299 HEOS 3. Even though the HEOS costs 50 percent more than the Sonos, I’m not sure it sounds 50 percent better. But the extra inputs on the back of the HEOS, combined with its sexy shape and ability to sit horizontally as well as vertically might help someone rationalize the difference.

Also, the HEOS 7 might not be worth $599 to you, but I can tell you that it sounds a lot better than Sony’s comparable SRSX9 at $699, with more features too.

For most people, the appeal of creating a whole-home wireless audio system is convenience. They want the music that they love wherever and whenever they want it. Quality sound matters and so does flexibility, but these can’t come at the price of ease of use.

While there are strong arguments to be made that Denon’s new line of HEOS wireless speakers are a match for Sonos (and then some), when it comes to sound quality and versatility of external music source, the strength of the Sonos set-up and software ease of use have yet to meet their match at any price.

I’m sure that in time, Denon will improve the HEOS software (after all, Sonos has a significant head start) and add more online music services, to create a more level playing field with Sonos. But for now, Sonos has the edge and ultimately wins this comparison.