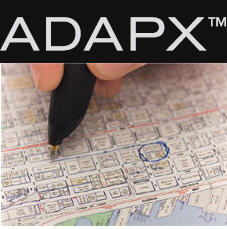 Digital pen maker Adapx of Seattle, Wash., says it is changing the way data is captured in the field – by giving you a new-fangled pen.

Nothing works in the field like good, old-fashioned pen and paper. You can chew on the end of the pen, you can use the paper for other things when you’re caught short in the field, and you can replace it all cheaply.

Try those shenanigans with a laptop or tablet PC.

So Adapx has made a digital pen called the Penx. The size of a highlighter, the pen writes with ink on paper maps, forms or journals while simultaneously using a built-in digital camera and image processor to store what it has done in memory. When hooked up to a computer using a docking station, it uploads the captured information into programs like Microsoft’s OneNote, Autodesk’s AutoCAD or ArcGIS for military use, all using its Capturx software.

Adapx (pronounced “Adapts”), has just received $10 million in a first round of funding from OVP and the Paladin Capital Group. It will use the money to further enhance and market its Capturx product to its target markets. Its being pitched for use in battle fields, but also government departments, utility companies, architectural and construction firms – all of which use CAD programs in their work.

The company is eight years old, but has only recently started selling its product. I talked with chief executive Ken Schneider, and he said the company has pre-orders totaling “in the hundreds” of units.

LiveScribe offers something very similar, but it targets the educational market and is even more high-tech (see our coverage here).

Here’s the catch for both of them: You don’t just use any paper, you have to use digital paper. (You can buy regular paper, but you need a postscript printer to place a set of imperceptible dots on it. These dots detect what you’re writing, and can transfer it electronically back into Adapx’s software, similar to the way LiveScribe works.)

Adapx offers a OneNote digital notebook and special ink formulated to write in the notebook with.

The Penx is rechargeable and its built-in battery should last about three years. It can be password-protected so the information it contains cannot be downloaded by anyone else.
This isn’t cheap: The digital pen costs $249.95; a 10-pack notebook kit for Microsoft Office OneNote costs $2,990 (a five-pack costs $1495 so no quantity discount there), ink refill cartridges for the pen cost $175.50 for a 100-pack and $91.85 for a 50-pack; and a mini-dock replacement costs $29.95.