Prior to the pandemic, average grocery profits hovered around 2%, mostly due to transportation and logistical inefficiencies. Shifting product demand and sales compounded these issues, with stores now responsible for 10% of U.S. food waste. This over-ordering not only costs profitability, but forces retailers to increase prices to make up for the losses. In April 2020, grocery prices showed their steepest monthly increase in nearly 50 years, led by rising prices for perishables like meat and eggs.

Shelf Engine, a Seattle-based startup cofounded in 2015, aims to make a change by tapping AI to help stores increase profits while reducing product waste. The company today announced that it raised $41 million in series B funding, bringing its total raised to $58 million as its platform expands beyond 85 customers and over 2,000 stores nationwide.

According to cofounder and CEO Stefan Kalb, grocery retailers that fail to innovate today could put their companies at risk. Traditionally, inventory managers use computer-assisted ordering and software-as-a-service solutions that require upfront hardware and software investments. These solutions frequently fail to account for on-hand inventory data and high volatility in sales patterns, such as with pandemic or weather-related buying. An analysis by Retail Insight found that 56% of records of perpetual inventory (PI), which determines how much stock a store receives on each delivery, are incomplete and that 15% of lost sales are a result of inaccurate PI.

“[During the pandemic], grocers were impacted by new demand patterns they weren’t ready for. This created a spike in stock-outs as well as waste. This has accelerated the number of grocers who now want AI to take over their ordering and reduce their risk profile,” Kalb told VentureBeat via email. “We’re about to see a massive transformation in the grocery space, but it’s not what you’re expecting. Yes, online grocery is growing, but it will be nothing compared to store operations, procurement, and merchandising. Grocery will become a very efficient business and generate way more profit than ever before.” 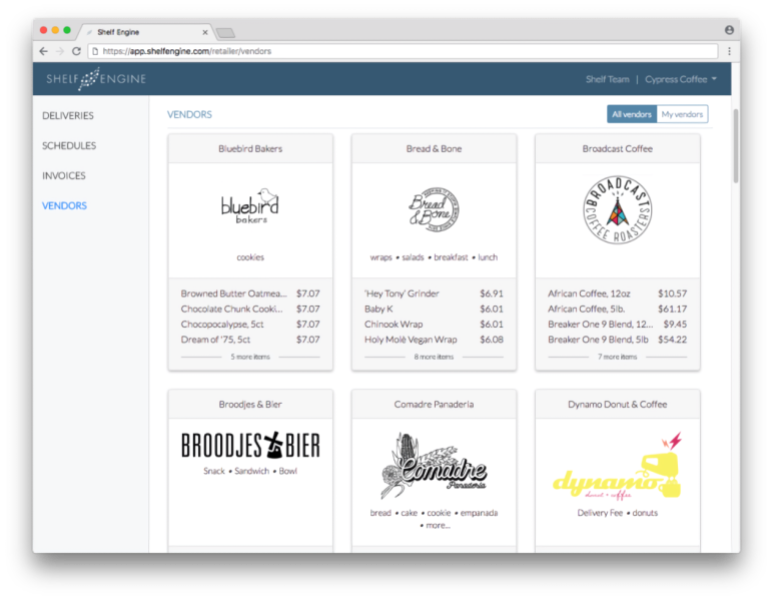 Using machine learning, Shelf Engine forecasts demand for highly perishable foods, reducing waste and out-of-stocks. Drawing on point-of-sales data along with considerations like school schedules, local events, holidays, and weather, the platform generates probabilistic models for each unique product for every store, every day. These models are translated into profit maximization models to create orders, which are then fed by time-series models along with machine learning-based-dependent models. As a last step, Shelf Engine submits a store’s orders to vendors.

Shelf Engine doesn’t charge for items that don’t sell — retailers only pay for the items that do. According to Kalb, one national grocer increased its profit margin 63.7% by using Shelf Engine to eliminate the cost of shrink from spoilage, breakage, and theft. Shelf Engine’s customers on average minimize stockouts by 90% while reducing food waste by as much as 32%, Kalb claims.

“We’re reducing waste, while simultaneously increasing sales, and that goes straight to the grocer’s bottom line,” Kalb added. “We’re helping grocers to make much more money, better positioning them to gain market share and offer competitive prices, especially important as tech giants and other disruptors are entering the market. This latest round will enable us to further meet the demand from our customers to launch into thousands of new stores in the next 18 months.”