Midterm elections are upon us in the United States, and the outcome of today’s votes will soon be shared far and wide, but one place you may not find election results is on the home screen of the Amazon Echo Show.

The second generation of Amazon’s smart speaker with a screen, which made its debut last month, is able to share flash news briefings and podcasts from hundreds of news outlets and can even answer specific questions about midterm election results. But headlines shared by the Echo Show on a daily basis never discuss Democrats, Republicans, or politics in any form; and never mention the name of President Donald Trump.

In contrast to Facebook’s Portal and Google Home Hub, the Echo Show is unique among smart displays in that its ambient screen serves up news stories, so if you buy the device, these headlines could be the majority of what you see when the device is not otherwise in use.

VentureBeat reached out to Amazon to speak with the team that writes headlines and picks stories for the Echo Show home screen, but the company declined to comment when asked about the size of the team and how stories are chosen.

“Trending Topics primarily surfaces lifestyle, entertainment, technology, and sports news since it’s a communal device that the whole family sees and uses,” a company spokesperson told VentureBeat in an email.

You may have missed it, but Amazon has joined Google and Apple in hiring a team of people to surface news stories and practice editorial judgment on behalf of a tech giant.

When the Echo Show isn’t making video calls or telling jokes, its device’s home screen displays a carousel of content that rotates between your calendar events, reminders, and news stories that appear to have a distinct flavor.

The home screen focuses heavily on sports and music news, but analysis by VentureBeat of more than 100 headlines dispensed over the course of the past month found that the Echo Show focuses primarily on stories that can be described as irreverent, quirky, shocking, or fun.

Examples of stories highlighted in the past month include:

News stories tend to be videos, but they can also be text on the screen news briefs read by Alexa. Outlets whose work is displayed on the Echo Show home screen include the Washington Post, USA Today, TicToc by Bloomberg, and the Associated Press. 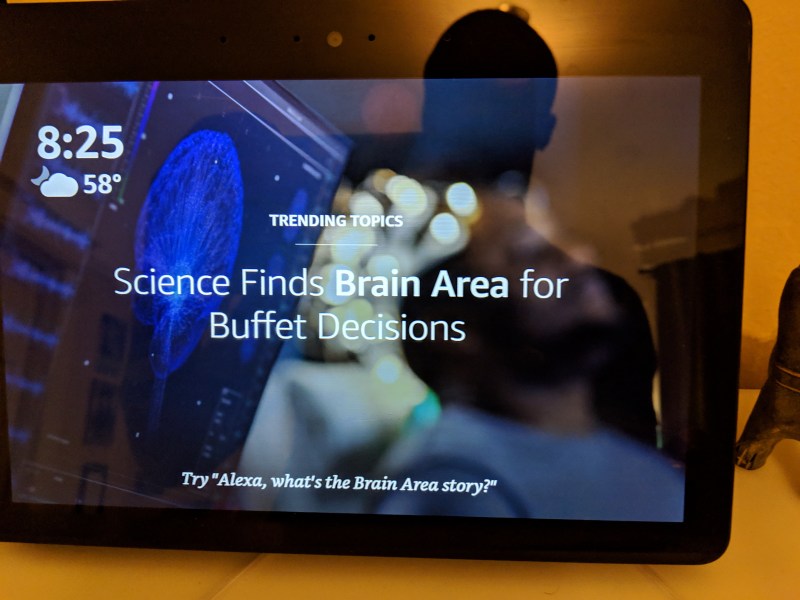 Since headlines are inconsistently capitalized, text sometimes fails to cite its source, and you can’t rewind or fast-forward videos, it seems clear that portions of the Echo Show home screen experience are still half-baked.

But the most telling aspect of Echo Show headlines is what Amazon chooses not to highlight.

As we followed the headlines for about a month, no mention of the Brett Kavanaugh appointment to the U.S. Supreme Court was observed. There was also nothing about the 11 people killed at Tree of Life Congregation in Pittsburgh or the string of mail bombs sent to members of Congress, former presidents Barack Obama and Bill Clinton, and former vice president Joe Biden.

The Echo Show is a new kind of device that Amazon wants people to put in their bedrooms or kitchens. With the hope of mass adoption, Amazon appears to be trying to avoid things that can be considered negative or divisive. But this raises the question: If the appointment of a controversial Supreme Court justice, one of the largest political assassination attempts in U.S. history, and the deadliest attack against Jewish Americans in U.S. history don’t qualify as hard news worthy of being displayed on the Echo Show home screen, what will?

News on the Echo Show home screen wasn’t all irreverent. Some of it was practical and helpful, like the study that recently found obesity surgery may lower heart attack risk for people with diabetes.

There was also a higher than average number of climate change-related stories, specifically stories about glaciers.

Another story on the woke spectrum categorized income inequality in the United States by metropolitan area.

Alexa does a good job of seeming apolitical, however a story suggesting more people should live in cities and a decent amount of climate change coverage could be characterized as touching on political territory.

By contrast, there were also stories about Chance the Rapper investing in Chicago and parking tickets for Goonies fans in Oregon, but news articles highlighted by Amazon on Echo Show screens in the past month at times seemed more focused on the South or Southeastern portions of the United States, a concentration that highlights the need for location-specific results.

Example stories from the region include bed bugs invading a South Carolina courtroom, an albino python in a Goodwill store in Texas, and multiple severe weather or Hurricane Matthew-related stories.

In addition to serving up your reminders, calendar events, and news, the home screen includes things like new dictionary words, birthdays of famous people, and holiday content — like the kinds of Halloween costumes that were popular in 1984.

The kinds of questions Echo Show users see here is likely to grow or change. Proactive alerts from Alexa — called hunches — were introduced in September.

Today, Alexa hunches are exclusively related to smart home devices, so if your back door is unlocked after you have said goodnight, Alexa may suggest you lock the door. As this extends beyond smart home devices, it could also come to include recommendations based on the type of news you listen to most or your local news providers.

In 2016, the city of Los Angeles began work on an Alexa skill that would enable residents to get updates about their City Council and things like local library hours, with the end goal of making the Alexa skill able to take non-emergency reports for graffiti cleanup, animal control, and other services.

A number of developers or municipal governments have also made voice apps to do things like notify residents of trash pickup schedules or pool hours.

Today, Echo Show sales make up a smaller percentage of the overall Echo family of smart speakers than devices like the Echo Dot, but as these devices spread, Amazon should help users with the engagement necessary for self governance, and in addition to the irreverent could serve up vital informatn like public safety alerts or recommend skills that can help them interact with their local community.

In moments when a political topic is trending nationwide or in the wake of a national tragedy, it can seem strange to be served stories about how “Bieber Burrito Incident Was Actually a Hoax” or the “Groutier’ Wind Scrabble Championship.”

That being said, we all need an occasional break from the alternately uplifting, insightful, and soul-crushing experience that is the modern news cycle. I’m a hard-nosed news junkie and journalist and even I sometimes scroll past stories for the sake of my mental health.

But people deserve the option to get news or information that’s harder-hitting than “Oldest Flying Squirrel Fossil Discovered” or “Video: This is why people are voting on fat bears in Alaska.”

It’s your right as a U.S. citizen to stick your head in the sand and play no part in the political process or local issues, but for people who care about their community and country, woke mode should be an option.

No time is that more clear than during a midterm election thats attracted more voters than a presidential election.