Sandbox at Alphabet, Google parent company Alphabet’s second, secretive software development team, plans to launch a set of APIs called Floq that will allow developers to use tensor processing units (TPUs) to simulate quantum computing workloads. The announcement, which was made during a February livestream that garnered little mainstream attention, hints at the potential for hardware originally designed for AI applications to extend into the quantum realm.

Experts believe that quantum computing, which at a high level entails the use of quantum-mechanical phenomena like superposition and entanglement to perform computation, could one day accelerate AI workloads compared with classical computers. Scientific discoveries arising from the field could transform energy storage, chemical engineering, drug discovery, financial portfolio optimization, machine learning, and more, leading to new business applications. Emergen Research anticipates that the global quantum computing market for the enterprise will reach $3.9 billion by 2027.

According to Sandbox at Alphabet research scientist Guillaume Verdon, Floq, which will initially be made available in alpha to 50 teams in the QHack Open Hackathon, will offer a simulator API that leverages the “bleeding edge” of AI compute for experimentation. The Sandbox at Alphabet team repurposed TPUs, chips developed by Google specifically for AI training and inference, to accelerate simulations in the cloud so that developers can use frontends like TensorFlow Quantum and PennyLane to create quantum models and run them remotely on Floq. 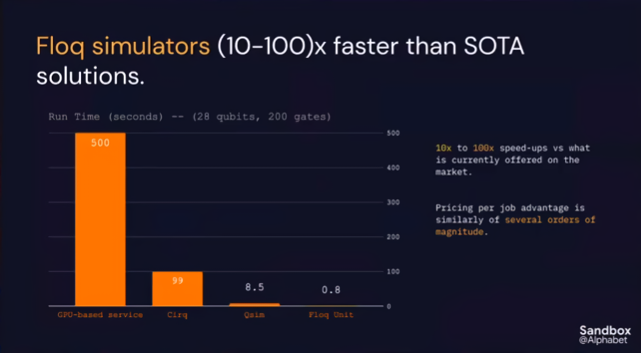 Google’s TPUs are liquid-cooled and designed to slot into server racks; deliver up to 100 petaflops of compute; and power Google products like Google Search, Google Photos, Google Translate, Google Assistant, Gmail, and Google Cloud AI APIs. Google announced the third generation in 2018 at its annual I/O developer conference and this morning took the wraps off the successor, which is in the research stages. 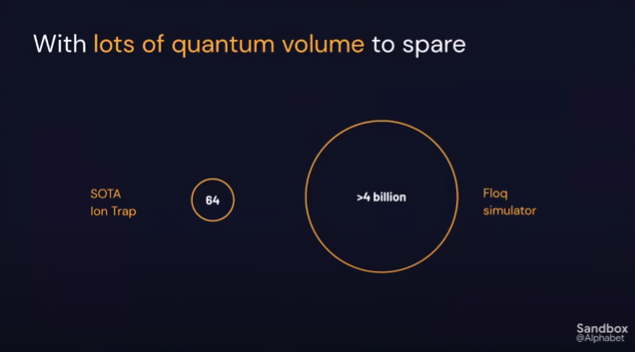 Verdon says that Floq simulators, dubbed Floq Units, run 10 to 100 times faster than state-of-the-art simulations accelerated by GPUs when compared in terms of runtime. Moreover, by quantum volume — the maximum size of square quantum circuits that can be implemented successfully by a machine — Floq currently exceeds 4 billion and in the future will reach into the trillions. In simplest terms, quantum circuits are a sequence of matrix math operations performed on qubits, the quantum version of a bit. 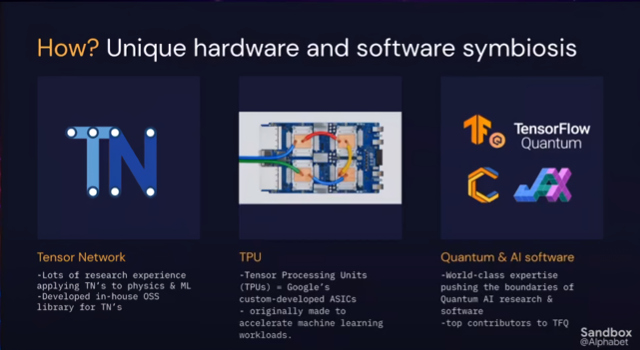 “The team has been experimenting with how to use Floq for physics, machine learning — all kinds of cool applications,” Verdon said. “And we’ve developed our own open source library for tensor networks that runs on TPUs … It’s [surprising] how good the chips are for quantum simulation. It’s almost like they were designed for this task.”

When it launches more broadly, Floq will complement Cirq, Google’s service that gives developers access to its quantum computing hardware. And it’ll compete with a number of other quantum simulators already available on the market, including a service in IBM’s Quantum Experience suite and simulators from Intel, Amazon, and Microsoft.

But Floq’s reliance on TPUs looks to set it apart from the pack — at least on the performance end of the equation.