Advanced Micro Devices revealed the Zen 2 architecture for the family of processors that it will launch in the coming years, starting with 2019. The move is a follow-up to the competitive Zen designs that AMD launched in March 2017, and it promises two-times improvement in performance throughput.

AMD hopes the Zen 2 processors will keep it ahead of or at parity with Intel, the world’s biggest maker of PC processors. The earlier Zen designs enabled chips that could process 52 percent more instructions per clock cycle than the previous generation.

Lisa Su, CEO of Santa Clara, California-based AMD, made the announcement at an AMD press and analyst event in San Francisco.

“So much has really happened in the last two years,” she said. “I’ve been CEO for four years. It’s been an incredible four years. But we are just at the beginning of our journey.”

Zen has spawned AMD’s most competitive chips in a decade, including Ryzen for the desktop, Threadripper (with up to 32 cores) for gamers, Ryzen Mobile for laptops, and Epyc for servers. In the future, you can expect to see Zen 2 cores in future models of those families of chips.

“Zen 2 is our next-generation system architecture,” Su said, noting chips using it will be made with 7-nanometer manufacturing, where the width between circuits is seven billionths of a meter.

Su said the new chips will be targeted for the workloads of the future, including machine learning, big data analytics, cloud, and other tasks. AMD is going after the $29 billion total available market for data center chips by 2021.

“We see strong double-digit growth for the foreseeable future” for the overall market, she said. “We are not looking at incremental changes. The products you are seeing today are the products of the decisions we made four or five years ago. They were bets on where we think the market was going.”

The Zen-based designs are AMD’s most competitive in a decade, and it now has every major computer maker using the Epyc chips for servers, from HP Enterprise to Dell. It is also feeding chips to data centers that run cloud deployments for Microsoft, Baidu, Tencent, Oracle, and others. 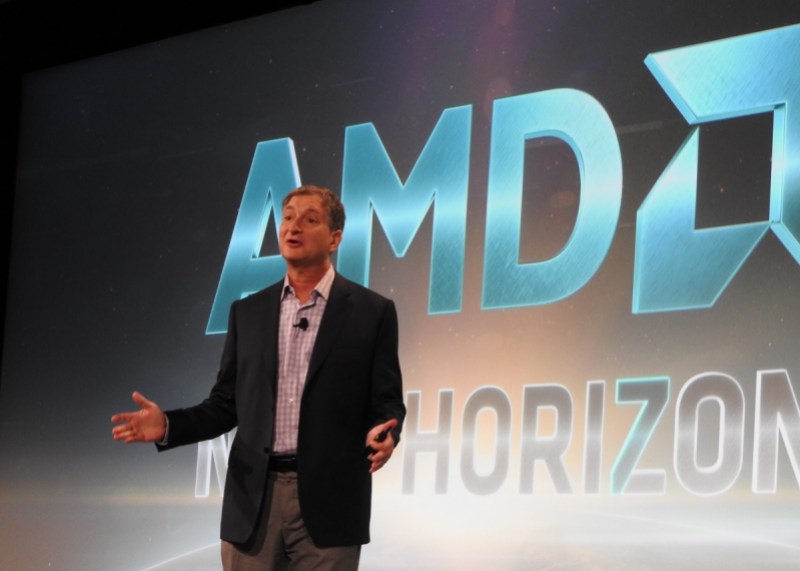 AMD and Amazon Web Services announced today that Amazon Elastic Compute Cloud will use AMD Epyc CPUs, so customers can get access today to instances running on the AMD processors. Intel noted that it has an extensive relationship with AWS.

The next-generation Epyc platform is code-named Rome, which will debut next year with 7-nanometer technology.

“Zen 2 marks the delivery of our promise of continuity,” he said. “We called a play and we are delivering. We are executing.”

“You will see a huge jump as we go to Zen 2 products,” Papermaster said.

Intel has not yet made a comment, but it has scheduled a December 11 event to talk about its architecture.

AMD also has a “chiplet” design approach with modular components on the chip that can more efficiently feed and receive data from processor cores. It will also have higher instructions per clock than the original Zen products.

Kevin Krewell, analyst at Tirias Research, noted that AMD did not describe the “instructions per clock cycle” for Zen 2, but he assumes it will be better than the original Zen. He noted the doubled floating point performance figure was impressive.

Forrest Norrod, senior vice president at AMD said that Epyc adoption can lead to 45 percent lower total cost of ownership (TCO) compared to Intel-based systems. He said that comes as a result of lower admin, licensing, hardware, and space costs.

Pete Ungaro, CEO of Cray, said onstage that Cray’s next Shasta supercomputer with use AMD Epyc processors. The machine will be made for government agencies such as the Lawrence Berkeley National Laboratory and run at 100 petaflops.