Advanced Micro Devices today launched its third Zen-based Epyc processors for datacenters as the chipmaker continues to go after the heart of Intel’s processor business.

Once the perpetual underdog, AMD got a leg up a few years ago with the novel design of its Zen architecture, which can process a lot more instructions per clock cycle than previous AMD chips. AMD has used that advantage to make gains against archrival Intel in both the consumer and enterprise processor businesses.

“We’re now deep in a compute megacycle, which is super exciting. And [AMD CEO Lisa Su’s] vision for it was really exciting, with the chiplet model and delivering really high density and high performance,” Dan McNamara, senior vice president and general manager of AMD’s server business, said in a press briefing. “Milan, or third-gen Epyc, is really the next step on the journey. This compute megacycle is about connected devices driving all the data from edge through the network to the cloud.” 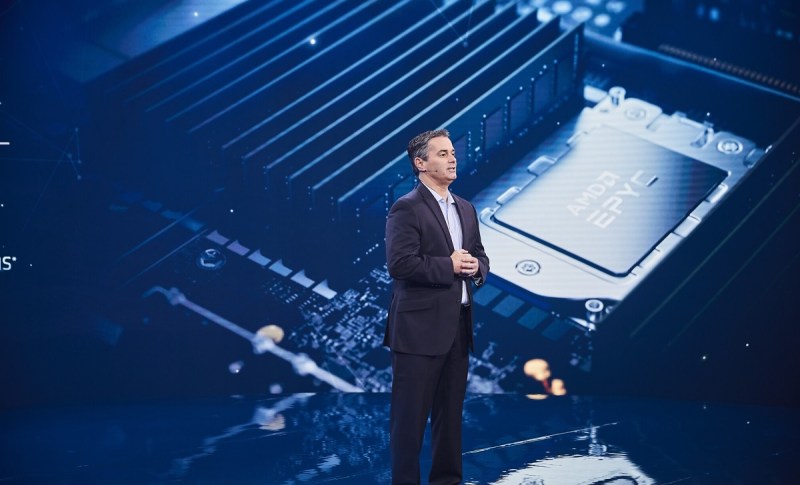 Above: Dan McNamara heads the server business at AMD.

IDC analyst Shane Rau said in an email to VentureBeat that in the fourth quarter of 2020 AMD held 7.7% of the server CPU market on a unit basis and 8.7% on a revenue basis. IDC estimates that about 10% of AMD’s server CPU volume in the quarter was Milan, sufficient to raise AMD’s overall server CPU average selling price sequentially. He said that cloud service providers bought those processors, especially the high-end  64-core processors.

“This result indicates that Milan is getting a good initial reception from those who demand the highest in performance,” Rau said.

AMD debuted its first Epyc central processing unit (CPU) based on Zen in 2017, and then it launched its code-named Rome Epyc CPUs in August 2019. Now the company is launching the third generation CPU code-named Milan in the hopes that major datacenter customers will no longer take a wait-and-see attitude toward AMD. After executing three generations in a row, AMD believes customers are ready to embrace the company for the longer term, McNamara said. Now it is launching its AMD Epyc 7003 Series CPUs.

“We’re really on this great execution cadence, when it matters most, which is right now during this megacycle of compute,” McNamara said.

In cloud, AMD has more than 200 Epyc public instances. And with the introduction of Milan, AMD is on track to reach more than 400 Epyc instances in 2021. For cloud providers who need compute density and security capabilities, AMD Epyc 7003 Series processors offer the highest core density, advanced security features, and up to twice the integer performance compared to the competition.

In HPC, the number of AMD-powered supercomputers on the November Top 500 Supercomputer List increased to 21 systems, including two of the top 10 and the fastest supercomputer in Europe. As HPC becomes critical for more and more enterprise workloads — not just government and research entities — this demand will only increase, McNamara said.

AMD said the new processors increase transactional database processing by up to 19%, improve Hadoop big data analytic sorts by up to 60% with 61% better price to performance than the competition, and offer superior performance for flexible Hyperconverged infrastructure — all of which
helps CIOs turn data into actionable insights faster. AMD also said the Epyc 7003 Series processors enable faster time to discovery with more input/output and memory throughput and Zen 3 cores that deliver up to twice the performance for HPC workloads compared to the competition.

In the enterprise, AMD is entering a high-performance cycle driven by the increasing adoption of cloud computing services and the accelerating digital transformation of businesses, as well as the rise of 5G and AI. Enterprise demand will only continue to go up as a result, McNamara said.

“I see Milan as a big step forward for AMD, delivering strong performance across a range of workloads and surpassing Intel on almost every metric, including single-core performance, multi-core performance, cache size, DRAM bandwidth, PCIe data rates, performance per watt, and performance per dollar,” said Linley Gwennap, principal analyst at the Microprocessor Report, in an email to VentureBeat. “The only remaining advantage for Intel is on AI workloads, since Epyc lacks AVX-512 and DLBoost. These advantages should help AMD continue to gain server share, particularly at cloud vendors.”

“We’re upping the ante here. It enables our customers to do more, do it faster, and then do it for less,” McNamara said. “We really believe that Milan, or third-gen Epyc, brings that next level of transformational value to the industry.”

The AMD Epyc 7003 Series CPUs feature Zen 3 core designs. Different versions of the processors exist, based on the number of Zen 3 cores in the chip. The CPUs can have up to 64 cores in a single chip, and they introduce new levels of per-core cache memory while continuing to offer the PCIe 4 connectivity and memory bandwidth that defined the EPYC 7002 series CPUs.

“Just when Intel thought it was catching up, AMD leapt and put even more distance between the two companies’ offerings,” Insight 64 analyst Nathan Brookwood said in an email to VentureBeat. “Some of the technical changes AMD’s architects made in cache organization should translate into dramatic performance gains for applications that can benefit from larger caches. The amazing thing from my perspective is that even with Rome’s (Epyc 2.0) performance edge, Intel still is capacity-limited in its shipments. The server market is red hot, and neither vendor has enough capacity to meet demand. The COVID lockdown has forced more people to spend more time staring at screens, and all that data has to come from somewhere. This is (hopefully) not a sustainable situation.”

“AMD is making steady progress, with higher CPU core performance and platform improvements for virtualization and security,” Tirias Research analyst Kevin Krewell said in an email to VentureBeat. “AMD has improved the cache structure for larger datasets. The company also has filled out its product portfolio from 8 cores to 64 cores that all have a consistent platform architecture. AMD also has added partners with unique value.”

The AMD Epyc processor ecosystem is expected to grow significantly by the end of 2021, with more than 400 cloud instances using all generations of Epyc processors and 100 new server platforms using third-gen Epyc processors.

“It’s hard to see AMD losing share in the datacenter over the next couple of years, unless it makes a strategic blunder, which doesn’t seem likely,” Endpoint Technologies Associates analyst Roger Kay said in an email to VentureBeat. “Intel’s advantage in process node has been neutralized, and working with foundries seems like a strength now for AMD. Intel can make legitimate compatibility claims in some circumstances, but for many others, AMD will do just fine. The Epyc program is like the old Opteron days, only better.”