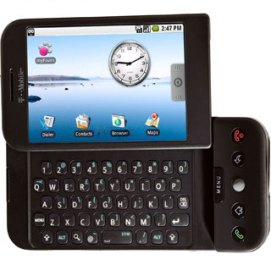 T-Mobile confirmed that it will release its firmware “Cupcake” update to revamp the G1 Android phone in April. The new software will add a virtual keyboard (in addition to its hardware QWERTY version), video and voice recording, the ability to save MMS attachments and stereo Bluetooth support — as well as a refresh of its Linux kernel that should zap most reported bugs.

When it comes to web browsing, the souped-up G1 will offer the latest version of the Webkit core with support from the new Squirrelfish Javascript engine, and cut-and-paste functionality. On top of that, there will be a page that lets users view which third-party applications they are currently running, and a settings dashboard to toggle animation speed, font size and button behavior. These changes should make it a much worthier opponent for Apple’s iPhone.

Also in the news today, Amazon broke the $100-price barrier for the G1, offering the T-Mobile phone with Android software for as low as $97.99 (down from $400). The catch is that this price point comes with a two-year contract with T-Mobile that costs $40 a month and penalizes those who break it $250. T-Mobile says it permitted the drop in price to remain competitive with the iPhone and Palm’s much anticipated Pre.

A firm date hasn’t been set for the Cupcake launch. T-Mobile says it is waiting for the green light from Google. But the April projection is fairly exciting — we’ve been waiting for a while.