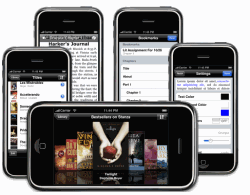 It’s a sad day for fans of the ever-popular iPhone e-book reader application Stanza. Developed by Lexcycle, the app offers e-books for purchase, as well as a lengthy selection of public domain works. It was notable for having a gorgeous and easy-to-use interface, as well as the ability to transfer books in the ePub or eReader formats from your computer to your iPhone via USB cable.

But TechCrunch is reporting that Apple has forced Lexcycle to remove the USB sharing feature in the latest version (2.1) of the app. On iTunes, the update notice for the app reads “‘Removed the ability to share books via USB as required by Apple.” And when asked for comment about the feature removal, the developers said that they are “forbidden from discussing the specifics of our conversations with Apple on this matter.”

According to a blog post written back in December by the makers of another iPhone app, PatternMusic, many developers rely on the iPhone’s DCIM digital media folder as a method of transferring files from the device to the desktop via USB. Unlike most locations in the iPhone’s file system, app developers can read and write to the DCIM folder — something that’s necessary  in order for apps to access the iPhone’s camera roll photos and videos. The problem for app makers is that using this DCIM workaround is against Apple’s developer agreement.

The blog post also mentions that Apple has forced other apps to stop using the workaround as well, including DigiDNA’s FileAid (now called FileApp) and Good.iWare’s GoodReader.

The conspiracy theorist in me wonders why Apple just now decided to remove the feature from Stanza — particularly since Lexcycle was recently purchased by Amazon. We’re not that far off from the announcement of the iPad, which is being marketed as their solution for eBook readers. Were they afraid of users bringing ePub or eReader books to the iPad? Or perhaps they didn’t want Amazon to be behind an app that offers features Apple likely won’t allow on the iPad’s eBook software.

Regardless of their reasoning, this move isn’t going to go over well with developers already complaining about Apple’s amorphous and controlling App Store rules. With many criticizing Apple for going the same route with the iPad, Apple needs to show that they can be more understanding towards developers instead of flaunting their ability to remove beloved features.