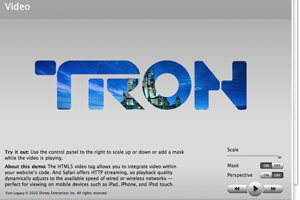 Steve Jobs’ ban of Adobe’s Flash technology for videos, animations and interactive mini-applications from his iPhone and iPad computers is one of the most widely controversial decisions the Apple founder has made. In an attempt to prove that Flash isn’t necessary, Apple has posted a set of seven demo pages that show off the power of HTML5, the emerging new standard for Web content that will run, theoretically, in any browser on any device.

The demos require you to use Apple’s Safari browser.  (Update: See the comments below this post for instructions on running the demos in Chrome.) This seems counter to the core premise that other browsers — Chrome, Firefox, Opera — are able to display HTML5 content. But if you’re willing to install Safari on a PC, you can see most of the technical tricks on display in these pages. Some features only work on a Mac.

If Jobs gets his way, Web developers will abandon Flash and use these HTML-based tricks instead. He’s got one big hurdle in the way: How to get everyone on the Internet to upgrade their browser. Flash, remember, became ubiquitous because Web surfers needed to install it to watch YouTube. What Apple needs is a compelling website for which people will install a new browser to avoid being left out of the fun. Just as Adobe’s Flash was popularized by a video startup, the killer site for HTML5 almost certainly won’t come from Apple.