Apple today updated its iOS adoption numbers, as measured by usage of its App Store and presented on the support page for developers. In doing so, the company confirmed that iOS 8 adoption has indeed been slower than previous versions: Over the last two weeks, the latest version only gained 1 percentage point.

Between September 21 and October 5, iOS 8 share has increased from 46 percent to 47 percent. In the same period, iOS 7 fell 2 percentage points to 47 percent, tying the two versions. The share on earlier versions actually increased from 5 percent to 6 percent, suggesting that many older devices may have been purchased or that some used workarounds to downgrade to iOS 6. It could also have simply been a minor blip in the data. 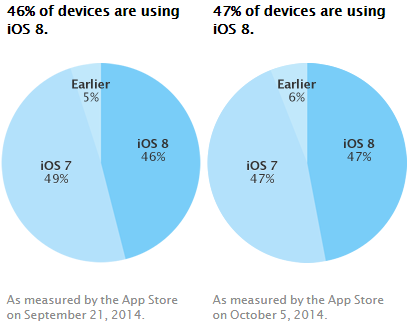 Multiple third-party tracking sites (most of which rely on ad impressions) have noted that early numbers for iOS 8 usage show a slower adoption rate compared to the same time period for iOS 7 and iOS 6. An increase of just 1 percent less than a month in appears to confirm this finding.

iOS 8 was released on September 17, 2014. In some 19 days, 47 percent of App Store users have installed the latest version. While previous releases were well above 50 percent by this time (we can’t provide exact figures since Apple only started reporting App Store usage numbers on December 1, 2013), the adoption rate is still very high, especially given iOS 8’s massive space requirements.

There are also many more iOS devices this year than last, an important point to remember when comparing percentages. In raw numbers, more people may be installing iOS 8 early on than previous iOS versions, but the slice is simply smaller because the overall pie is bigger.