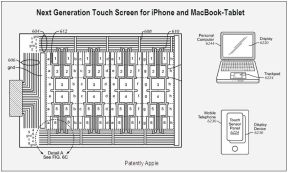 This morning, the U.S. Patent & Trademark Office published a patent application from Apple. Patently Apple blogger Jack Purcher published several illustrations from the application, and explained what each one represents.

“Apple’s patent, in general, could only be truly appreciated by someone with a Ph.D in this particular discipline,” Purcher wrote. But the basic breakthroughs are easily explained: 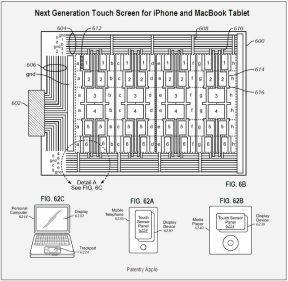 The new touchscreens can sense touches near the display, not just on it. Metal strips that run around the edges of the display are sensitive to finger contact outside the display area, but close to it.

This technology could be used to allow users to operate small screens by touching the sides of the gadget, rather than poking their big human fingers at an iPod-sized display.

These displays will be thinner and brighter. Current touchscreens need to place both an image generator and a touch sensor at each touchable spot on the screen. Apple’s patent shows dual-function pixels, in which the same miniature device that draws the pixel onscreen also serves as a touch detector. That removes one layer of hardware, making the display thinner. 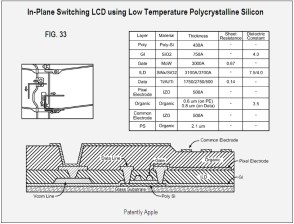 Apple has incorporated a well-known technology called Low Temperature Polycrystalline Silicon. But Purcher’s explanation of its benefits is unintelligible if you don’t already know what in-plane switching and TFT mobility are. So are the engineering websites I pored over this morning.

In short, it enables smaller and probably brighter displays. I think. Display experts, please enlighten me at paul@venturebeat.com or in a comment to this post.

The new technology is headed to the iPhone, iPod, MacBook trackpads and screens, and the secretive tablet computer. Figures 62A, 62B and 62C in the patent filing show a MacBook, an iPhone, and a “media player” that could be an iPod or, if you squint at it, a tablet.