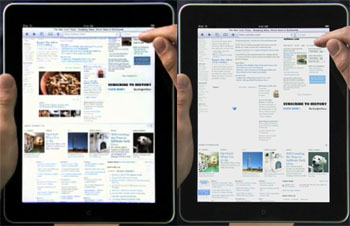 PC World reports that the iPad demo video which showed working Flash components in a New York Times webpage has been replaced. In the new video, the embedded Adoble Flash player generates the little blue Lego that means “I don’t have a working plug-in for this content.”

Why is Apple deliberately breaking Adobe’s Flash content? No one knows for sure. Theories range from “because Flash discourages adoption of Apple’s app model” to “because Steve just hates Flash.” Regardless, the iPad will certainly be throwing lots of blue legos onscreen, especially in ads as shown in this page of mockups.

Flash is used for in-page video, animation, and game content. The technology, which doesn’t use open Internet standards and encourages a lack of consistency in website user interfaces, was considered anathema by many Web technologists until 2005, when YouTube used Flash to deliver its easy-play videos. YouTube drove many Internet users to update their Flash plugins, suddenly rendering all sorts of other Flash content playable. Since then, Flash has been the embedded-video-player technology of choice.