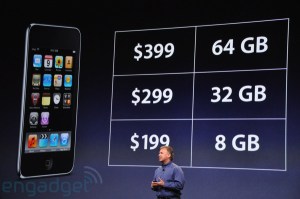 The most striking new product is a $149 iPod Nano that includes a tiny video camera, microphone, and speaker, yet maintains the Nano’s gumstick-slim size. It’s a marvel of miniaturization. Instead of a Flip camera, you can now slip a tiny Nano into your pocket and, assuming you can find it in there again, shoot YouTube-ready video without lugging around a full-size camera.

But Apple also debuted an upgraded version of its iPod Touch, shown off by Schiller in the photo above. It’s a handheld device that’s basically an iPhone without the phone. And without a camera.

It’s the glitch in Apple’s lineup: Both iPhone and iPod now have built-in cameras that shoot video. But if you spend $199 to $399 on an iPod Touch — Apple’s highest-priced handheld gadget, thanks to the subsidy that wireless carrier AT&T pays Apple to reduce the consumer price of iPhones — you don’t get a camera.

I’m sure any Valley product manager could whip up a convincing theory as to why it’s brilliant, just brilliant, of Apple to leave the camera off the Touch model. But I won’t believe it. The more convincing explanation comes from rumor blog AppleInsider, which claims that while Apple engineers were able to pack a super-tiny camera into the Nano, the camera unit on pre-production iPod Touches failed repeatedly for an unknown reason.