These multimillion-dollar machines are used in chip factories that can cost $22 billion to build and generate even more revenue than that. Such factories send wafers through hundreds of manufacturing steps before they’re finished and sliced into individual chips that are used in everything electronic.

With a severe shortage of such chips during the pandemic, Applied Materials’ latest improvements to the machines are timely, as the AI techniques enable the new Enlight optical wafer inspection systems to automatically inspect more chips and detect more killer defects that can ruin chips. These kinds of inspection machines alone add up to a $2 billion market worldwide.

Applied Materials executives like CEO Gary Dickerson have been predicting for years that the recent advances in AI would prove transformative in semiconductor manufacturing, and that’s what’s playing out now, Keith Wells, group vice president at Applied Materials, told VentureBeat in an interview.

“We all know that AI and big data have the potential to transform every area of the economy,” Wells said. “Today, that’s now reality. We’re bringing AI and big data into the semiconductor manufacturing.”

The new inspection systems are the fastest-ramping tools in the history of Santa Clara, California-based Applied Materials, which is the largest maker of equipment used in semiconductor factories. The machines speed time to revenue and help a chipmaker earn more profits over the life of a manufacturing process.

“We believe this is the industry’s fastest high-end optical inspector that is 3 times faster, and it has the sensitivity to find these yield-critical defects,” Wells said. “We believe it has the ability to impact the economics.”

Above: Chip manufacturing is getting more expensive and complex.

The challenge is that the costs of inspecting increasingly miniaturized patterns on wafers are rising, and the inspections are also becoming more complex. A decade ago, chip factory costs were about $9 billion. Now they’ve doubled. Over the life of the factory, the chipmaker can depreciate the cost of the chipmaking equipment in the factories. But manufacturing delays and inspection failures can cause factories to go idle (and lose a ton of money) as engineers try to decipher the cause of failures.

When it comes to memory chips, a week’s downtime can knock down annual output by 2%. On top of that, the price of the chips drops rapidly over time, and so falling behind schedule can severely damage revenue, Wells said. Add to this the notion that the inspection machines are getting more complicated and more expensive to produce.

“You don’t make money until you start ramping in volume in the millions of chips,” Wells said.

Dan Hutcheson, CEO of market analyst firm VLSI Research, said in a statement that being able to quickly and accurately distinguish killer defects is something chip engineers have struggled with for more than three decades. He said Applied Materials’ Enlight system with ExtractAI technology is a breakthrough approach that solves this challenge and added that because the AI gets smarter the more the system is used, it helps chipmakers increase their revenue per wafer over time.

In an email, Hutcheson said that Enlight can cut yield loss (the percentage of a wafer lost to defective chips) by $2.6 million for every hour it trims off the time to respond to a deviation from normal yields. He said inspection accounts for about 10% of the cost in an advanced wafer fab, and the current cost of such fabs is about $22 billion. That’s almost as much as two aircraft carriers and 65 F22 Raptor jets.

Semiconductor technology is becoming increasingly complex and expensive. So reducing the time needed to develop and ramp advanced manufacturing process nodes can be worth billions of dollars to chipmakers around the world.

But not being able to inspect chips fast enough is a barrier to speed. That’s a problem because it is increasingly hard to focus lenses so that you can see the surface of a chip, where the circuits are as little as five nanometers — or five billionths of a meter — apart. The tiniest specs of dust can be like boulders on the surface of a wafer.

That’s where the inspection machines come in. They can use AI to detect anomalies on the surface of a chip and then automatically fix the errors, if possible, so that the nuisance particles don’t ruin the circuitry.

“We’re looking for the defects that are effectively going to kill the device,” Wells said. 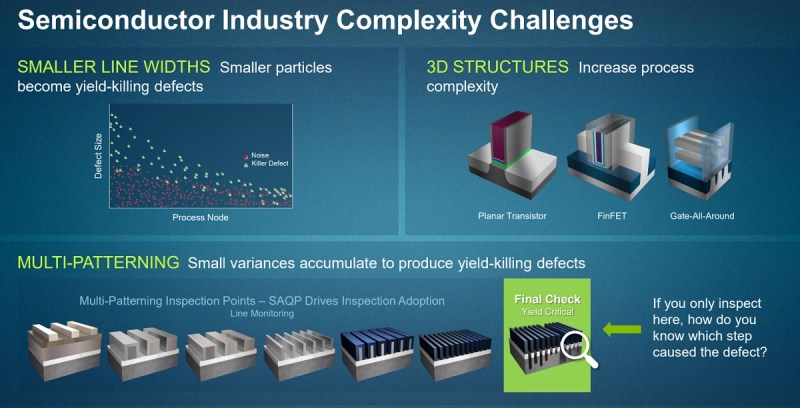 For instance, if two circuit lines get crossed, that will divert electrical signals and possibly short circuit an entire chip. The inspection system uses a state-of-the-art scanning electron microscope, which helps identify the signals coming off the optical inspector to do classification of the flaws, Wells said.

“We’re going to take that classified data, and we’re going to feed it into an AI algorithm, which we call ExtractAI,” Wells said.

The result is creating actionable data for customers that lets them solve problems faster than ever. In the past, chipmakers have deployed more primitive AI, where the classification engine is static. It doesn’t have the ability to learn and adapt automatically. But chipmaking processes, or recipes for building chips, change frequently.

“The next necessary step is to allow the AI to learn and adapt,” Wells said. “As the process changes, they can adapt.”

Applied Materials said that 3D transistor formation and multiprocessing techniques introduce subtle variations that can multiply to create yield-killing defects that range from vexing and time-consuming to root-cause.

The company is solving these challenges with a new playbook for process control designed to bring the benefits of big data and AI technology to the core of chipmaking technology. Applied Materials’ solution consists of three elements it claims work together in real time to find and classify defects faster, better, and more cost effectively than legacy approaches. 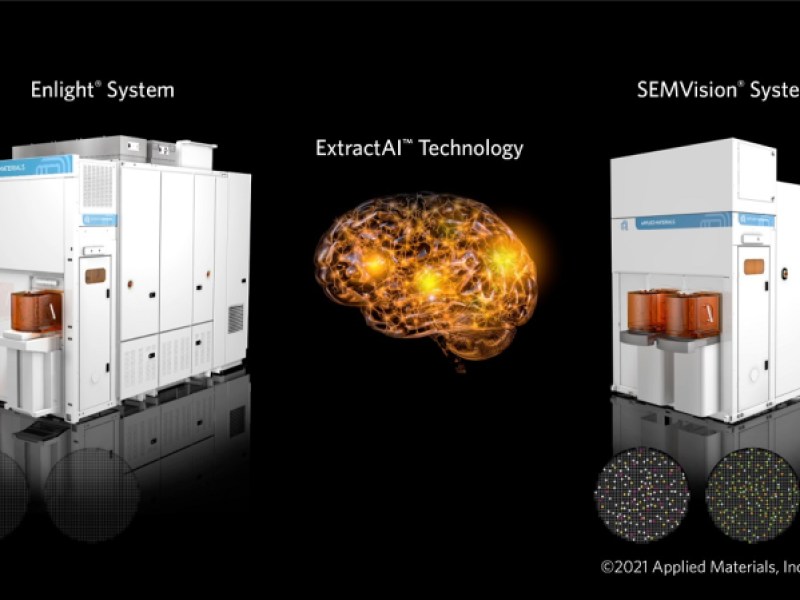 Above: Enlight, ExtractAI, and SemVision are part of Applied Materials’ new inspection process.

The AI comes in to make a decision about whether to slow the production speed down and alert a human about a problem in a wafer that carries a varying degree of risk.

In development for five years, the Enlight system combines industry-leading speed with high resolution and advanced optics to collect more yield-critical data per scan. The Enlight system architecture improves the economics of optical inspection, resulting in a 3 times reduction in the cost of capturing critical defects compared to competing approaches. The system has a more robust optical system — including features that put the equivalent of sunglasses on the optical lenses — to focus quickly on the problem parts of a wafer surface.

By dramatically improving cost, the Enlight system allows chipmakers to insert many more inspection points in the process flow. The resulting availability of big data enhances “line monitoring,” statistical process control methods that can predict yield excursions before they occur, immediately detect excursions so that wafer processing can be halted to protect yields, and enable root-cause traceback to accelerate corrective actions and the return to high-volume manufacturing.

“There are a lot of imperfections that engineers might not care about that your optical inspector will find, but it may not be a killer defect,” Wells said. “So the challenge is to give the customer actionable data.”

Developed by Applied Materials’ data scientists, ExtractAI technology solves the most difficult problem of wafer inspection: the ability to quickly and accurately distinguish yield-killing defects from the millions of nuisance signals or “noise” generated by high-end optical scanners. It has to take a million possible problems and reduce them to 1,000 that can be inspected more closely.

ExtractAI creates a real-time connection between the big data generated by the customer’s optical inspection system and the eBeam review system that classifies specific yield signals so that by inference, the Enlight system resolves all of the signals on the wafer map, differentiating yield killers from noise.

ExtractAI technology is incredibly efficient; it characterizes all of the potential defects on the wafer map after reviewing only 0.001% of the samples. The result is an actionable map of classified defects that accelerates semiconductor node development, ramp, and yield. The AI technology is adaptive and quickly identifies new defects during high-volume production while progressively improving its performance and effectiveness as more wafers are scanned.

The ExtractAI tech uses high-resolution scans to detect the worst problems. Once the actual defects are removed, the system learns to adapt to better detection techniques the next time around. ExtractAI can reduce the number of problem areas from about a million to just about 1,000 that will need a closer look or some action.

“We interrogate the data, and we’re actually learning and adapting our classifying defects in real time,” Wells said. “This is different from other approaches where the classifiers are static.” 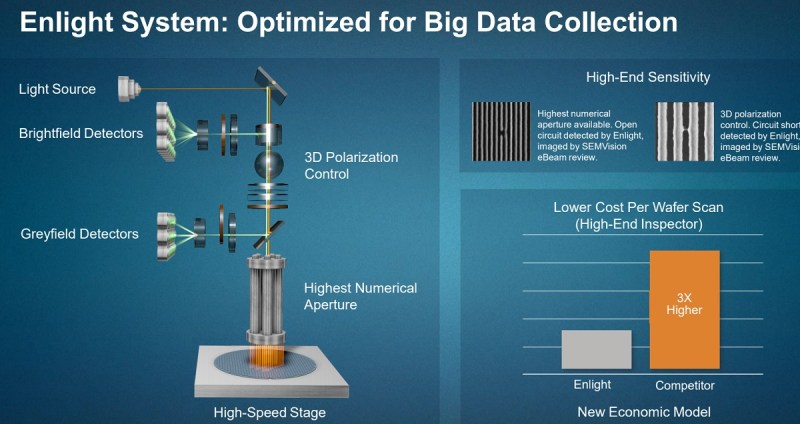 Above: Enlight has a complex optical system.

By working together in real time, the Enlight system, ExtractAI technology, and SemVision system help customers identify new defects as they are introduced into the manufacturing flow, enabling higher yields and profitability. The large installed base of SemVision G7 systems is already compatible with the new Enlight system and ExtractAI technology.

“We’ve seen over the last five years the rise in capital costs of these inspectors, making the economics difficult,” Wells said. “Customers have been reducing inspections in order to compensate for the increase in the cost of these tools. But unfortunately, when you reduce inspection points, you get yield problems. The industry wants a better economic value message around doing more inspection. And we’re trying to provide that.”