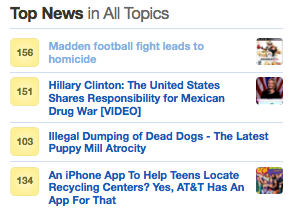 News aggregator site Digg has announced it unveiled a new “streaming API” (Application Programming Interface) that the company hopes will save it from declining traffic and community involvement.

“Today we’re releasing a new API feature which we hope will ease the process of using Digg’s data, and also freeing developers to model and store the data however they want,” said Digg software developer Will Larson.

Larson invited outside developers to create their own applications that can display the mountains of real time Digg data pouring forth each second. “Our Streaming API provides any developer with full access to a real-time stream of all submissions, Diggs and comments occurring on our site,” he said.

The hope here is that new users will come to Digg in large numbers through outside applications. This would be similar to how Twitter found millions of new fans in early 2009 when it opened up its API, allowing programs such as Tweetie, Seesmic and Tweetdeck to create interfaces that were more useful than the actual Twitter site itself. Larson even mentioned Twitter in the announcement. “If you’ve used Twitter’s Streaming API then you already understand the opportunity that awaits. If not, we’re pretty sure that if you spend a few minutes playing around with the API that you’ll find your curiosity sparked.”

“The way Digg is positioning its API is similar to what Twitter did. You must remember that traffic skyrocketed there. It was traffic that was funneled through external applications so I think Digg is trying something similar here,” said Victor Barrera, social media strategist at Village Voice Media.

At least one developer said this is exactly what he’s been waiting for. Mohanraj Thirumalai, who is also known as longtime Digg power user “Lt. General Panda,” says he is happy the API feature has finally arrived so that he can continue building a site designed to attract fellow diggers. “Yes, I was waiting for this. Developers were given a hint about this already… I had personally presented (to Digg) several scenarios where I was stuck with the (previous) API and they had mentioned this upcoming feature (this stream) would ‘answer it all.’ And yes, it answers it all. I am working on a site and much of my work was stalled due to the absence of this feature. I can now go back to working on it… I here need to stress, as critical as I was recently about Digg, Digg staff have been very cooperative on this front.”

There is concern however about whether enough developers will be interested in the new streaming API in order for Digg’s popularity to rise after its recent botched redesign attempt. “It’s coming at a time when interest in Digg is at a low point and that is a problem,” said Barrera. “How much interest is there in the developer community overall? Probably not much yet. It may take time to build.”

“I think it’s obvious that Digg should be building every single connectivity tool they can as they build out their immediate API. These and other pro-active moves will give Digg time as they attempt to attract a new generation of diggers,” said content creator Cecil Helton.

Another downside that several Digg community members mention is stability of the site’s API as well as whether or not it can handle thousands of requests per minute. Twitter became notorious for not being able to handle the traffic increases it saw, and still presents its famous “fail whale” to visitors at times even now.

“Basically, Digg has had problems scaling in the past and this streaming API may make it even harder for them to stay online,” said Barrera. “It’s going to put extra stress on their servers for sure. They’re probably preparing themselves for growing pains there that they may experience.”

“The stability of the old API with respect to the new one is just like comparing Digg version 3 to Digg version 4. It’s not good,” said Thirumalai. “We often get internal errors, timeouts etc. However, the stream is implemented on a different base and once a connection is established it steadily flows. It is going to take some testing to exactly say if it is going to connect every single time.”

If Digg can get through those issues, the potential upside could be huge. “Ultimately if the new API leads to creative applications, new comments and digs, it will basically increase Digg’s visibility across the Web,” said Barerra. “If you don’t have to be on Digg to experience it, that’s a good thing for Digg.”