Arkadium, a maker of “advergame” portals for well-known brands, said today it is expanding its reach with the acquisition of New York-based Gamelab.com.

The acquisition should help Arkadium get more traffic for its various casual game web sites. Arkadium currently creates platforms for casual online games where the game and portal are ads for a certain brand. It has a network of 5 million casual game fans who play web games that advertise brands such as ABC , AARP, or ESPN. On the AARP’s web site, for instance, Arkadium created the Driver Safety web game for senior citizens, and it operates the entire section of the AARP site that is dedicated to games. That section accounts for 60 percent of traffic to the AARP site. All told, Arkadium operates about 45 such game portals now. 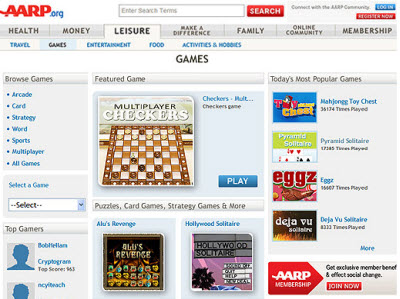 Founded by well-known game designer Eric Zimmerman, Gamelab.com built casual games that were published by other companies. Arkadium is not buying those games or the game development team, which was disbanded earlier this year.

As part of the announcement, Gamelab.com says it will introduce a series of free game design work shops for New York area game developers. Zimmerman will teach the workshops and consult for Arkadium, but he will not be a full-time employee of Arkadium, said Kenny Rosenblatt, chief executive of Arkadium, in an interview.

Gamelab gave rise to a number of big titles such as Diner Dasy and Subway Scramble. Zimmerman will teach “The Game Development Design Series” workshops starting early next year.

Arkadium was founded by Rosenblatt and his wife Jessica Rovello in 2001 and has 85 employees. It is based in New York and has an office in the Ukraine. The company originally started as a casual game site. But that wasn’t successful. Instead, Arkadium made money licensing its games to well-known brands. So it shifted into advergaming. Now it has more than 200 Flash games which it licenses out to brands. Those games can be easily customized. One of the top games is Mahjong Dimensions.

In the summer, Arkadium acquired Advergame.com and relaunched another gaming portal, GreatDayGames.com. The efforts are part of a plan to step up the number of ways marketers can reach gamers. It is also adding social features to its network of sponsored game portals. And it has added new business models, such as subscriptions and micro-transactions, for monetizing its games.

The company’s main rival in advergames is Blockdot, which differs in that it focuses on creating online games based on specific brands rather than offering entire portals for Web sites. Other rivals are Real Networks and Bunchball. The company is privately funded and is part of the Zelnick Media portfolio.

Rosenblatt said that the ad business was tough in the first half of the year, but he said it has come roaring back in the third quarter. Rosenblatt said the company has been profitable for five years.