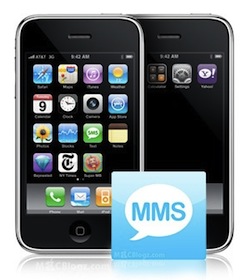 AT&T activated multimedia messaging (MMS) for iPhone owners in the United States today, as planned. This should silence some complaints about how the carrier is lagging behind iPhone carriers elsewhere, but could also lead to howls of frustration if it puts an even greater strain on AT&T’s much-criticized network.

If you want to turn on MMS, which allows you to send photos, videos, and audios through your text messaging application, see the instructions here. I’ve just activated the service on my iPhone 3G, and sent a test photo to VentureBeat writer Kim-Mai Cutler. It worked sloooowly, taking more than a minute to send. And, oh yeah, she didn’t receive it, because she hasn’t installed MMS on her end. Oops. Then I tried it with VentureBeat alum MG Siegler, and it worked — though again, slowly. 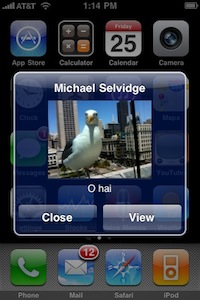 The fact that AT&T is activating MMS several months after other iPhone carriers was the subject of some indirect-but-pointed comments from Apple at its Worldwide Developers Conference in June. (It supports MMS on other phones already.) In retrospect, it seems totally reasonable that AT&T delayed the move to make sure the network was ready for the increased traffic — as long as the carrier has actually succeeded and iPhone users don’t see even worse reception than usual.

Analysts seem to think that MMS usage should be minimal. If most iPhone users are anything like me, they’ll try it once for the novelty, then go back to sending photos via email. After, all I use up part of my text messaging plan when I send one, and if I’m paying per message, photos and videos cost 10 cents more.

Meanwhile, there’s no date yet for when AT&T will support tethering, which lets iPhone owners use their phones to get wireless access on their laptops, and is another area where AT&T lags.