Target may have been behind the curve in store cyber-security, but it’s hoping to jump ahead by launching today in-store navigation and product finding for its app.

This is the first time Target has offered in-store functions for all of its 1801 stores in the U.S. It’s part of the retailer’s digital reboot, including updated iPhone and iPad apps, and desktop and mobile websites.

The new chapter in the history of retailing was implemented by Bellevue, Washington-based Point Inside, which has developed similar capabilities using its StoreMode platform for two other chains, Lowe’s home products stores and Michigan-based Meijer.

“What’s been missing for the physical world has been the digitization of a store,” Point Inside CEO and cofounder Josh Marti told VentureBeat.

With the updated Target app, a shopper begins by making a shopping list, using a type-ahead function that knows brand names. The app indicates if the product is available in that store. 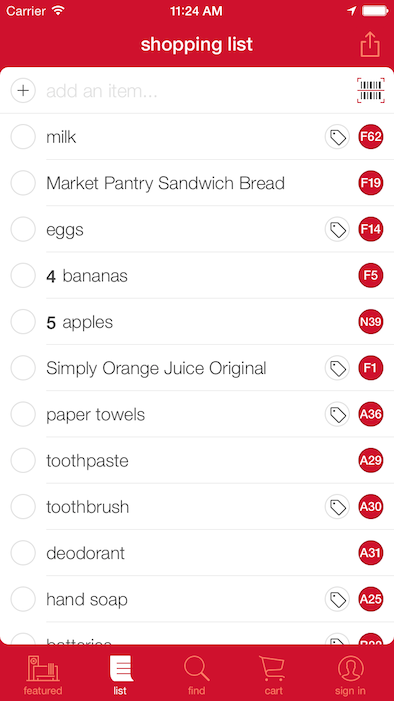 Above: A shopping list in the updated Target app

The navigation and available product inventory are store-specific, which Marti said distinguishes his company’s retailer apps from competitors involved in creating in-store shopper engagement, such as IBM Smarter Commerce.

“We treat every store as a snowflake,” he said.

Inside the store, Marti said, the app automatically switches to a different mode that is triggered by the geofencing surrounding every Target. A map shows the user the aisle location of each of the products on the shopping list. Once you find the Scotch tape, for example, you can manually delete it from your list.

And the updated app “will now highlight ‘doorbuster’ sales on Black Friday,” he said.

But, eager shoppers, don’t start your engines quite yet. Although Point Inside’s platform supports routing, the app doesn’t yet point out the fastest path to your dream bargain. In-store beacons or similar in-store communications, which Target does not yet have, would be required.

You might be expecting a navigational “blue dot” to show where you are on the map, but this is also missing — since GPS is lost inside the store. The map shown references the store entrance as a guidepost. (Beacons would also enable blue dots.)

The good news for shoppers wanting blue dots and fastest paths is that, according to Marti, “every retailer we’ve seen is doing piloting with beacons.”

This new version of the Target app is now available for iOS devices via Apple’s App Store, and it covers every U.S. store. The Android version has some of the same functionality but only covers about 40 U.S. stores. Marti said a full Android version for all stores is in the works.

Given Target’s rough history with cyber-security, we asked if any special precautions had been taken. Marti noted that his Point Inside’s platform does not support personal identification, so any break-in to their system would only get some unnamed person’s shopping list and map.

But there is a buy button, so personal information can reside in the app. The buy button also points to a near future for Target and similar retailers, when online versus offline shopping will become a distinction without a difference. Shoppers will be able to find products in the store and buy them online, or buy them online and pick them up in the store, or send a list to the store and pick items up later.