Avvir, a startup using laser scans and AI to catch construction mistakes, today announced that it raised $10 million in a funding round led by Trust Ventures. The New York-based startup, which is valued at $40 million, says it’ll use the funds to expand its workforce while improve its technology platform.

Mistakes often prove to be costly in the construction industry. According to a study commissioned by Autodesk, 5% of construction professionals’ time is spent on nonproductive activities including looking for project information, conflict resolution, and dealing with errors and rework. It’s estimated that these activities cost the U.S. construction sector alone over $177 billion in labor in 2018.

Avvir, which was founded in 2017 by CEO Raffi Holzer and CTO Tira Odhner, provides a platform that monitors construction progress for budget and schedule overruns. Customers send Avvir fabrication models and then deploy mobile lasers that can scan up to 30 square kilometers in an hour, even while construction is ongoing. Custom computer vision algorithms compare photographs and the scans with the building plans and catch errors and delays. Avvir claims it can identify construction problems like unlevel floors to one-eighth inch of accuracy.

Avvir can refresh bills of materials with site laser scans to document real-world modifications as they occur. The platform automatically pushes updates to models and enables monitoring of the percent completion of projects. Avvir tracks the progress on systems with color renderings that show which portions of the building geometry are finished and which aren’t — actual progress can be mapped against the schedule to highlight where the timeline might be off target. 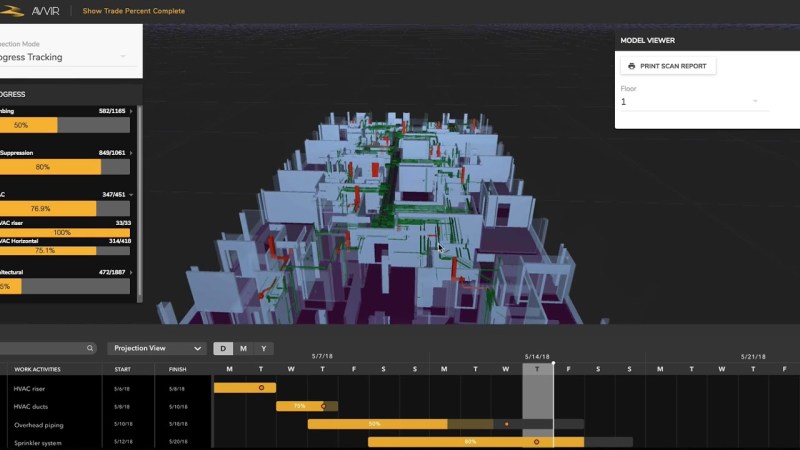 Avvir competes with companies including Swapp, which automates construction planning using AI. Another rival is SiteAware, a startup that tracks construction zone progress using a combination of drones and machine learning systems. Buildots, OnSiteIQ, Disperse, OpenSpace, and Indus.ai are among the other firms vying for a slice of the the AI in construction market, which is projected to be worth $2.31 billion by 2026, Mordor Intelligence reports.

But according to Holzer, Avvir, which has 18 full-time employees, has gone from $300,000 in annual recurring revenue to $1.4 million and roughly 12 customers and partners — including robotics firm Boston Dynamics — in less than 12 months. He expects that number to reach $4.4 million by 2022.

“Facility managers and building owners typically [don’t] have an accurate set of building plans off of which they could manage or plan renovations of their built assets,” Holzer told VentureBeat in an interview over email. “Avvir plans to become a true construction information platform, taking unstructured information from the field, structuring and analyzing it, and then enabling clients to take action on it either within Avvir or in any of the software tools they already use.”