With any luck, Avvo is going to make finding lawyers and getting legal advice a lot less intimidating.

That’s because the company, which formally launched its site today after more than a year of beta testing, applies Web 2.0 techniques that keep the lawyers honest and give consumers more options.

We already know it works — not least because of the controversy it has stirred. When Avvo first launched, negative ratings poured in on certain lawyers, and some fought back. One, John Browne, sued Avvo after a profile of him noted that he’d been disciplined by state authorities. But that only increased traffic, bringing more people — and thus more opinions — to the site.

Avvo is the brainchild of Mark Britton, who named it Avvo for the Italian word Avvocato, or lawyer. (He was teaching in Florence, Italy, when he cooked up the idea). Even while away in Italy, he still had to field queries from friends and family on how to find a lawyer.

Today, the Seattle-based company runs a site with three valuable services for consumers. It has a directory of lawyers in 18 of the most populous states. Each lawyer can be rated by their clients or peers, with the best rated lawyers rising to the top. It has an advice section where consumers can anonymously ask questions which real lawyers voluntarily answer in forums that everyone can see.

And it has a new service that debuted today: an understandable guide to the law, written by Avvo’s staff, which individual lawyers can customize depending on local legal systems. For instance, the Avvo staff can write a primer on immigration law for consumers that a Los Angeles attorney could tailor to the enforcement practices in the Los Angeles area.

“The mission is to create a free resources for consumers to handle their legal matters with confidence,” Britton said. “Normally, when you need a lawyer, the process of finding a good one can be frightening.” 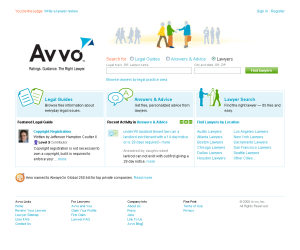 Britton, who has 16 years of legal experience and was the top lawyer at travel site Expedia, is betting the three legs will generate traffic. He expects to make money through advertising and other means. The site is already making an impact.  (The aforementioned suit was tossed out on First Amendment grounds). Most lawyers are responding positively; in the state of Washington, about 17 percent of lawyers have already filled out their profiles on the site so that consumers can read more about them.

“We can bring more transparency and understanding to the process of getting a lawyer,” said Britton.

Some of the lawyers are aggressively answering questions posed by consumers because they know that such consumers may eventually need to hire a lawyer. Attorneys are now answering thousands of questions a month, with about 90 percent of the questions getting an answer. I asked a question about legal advice for journalists and got a couple of answers within a few hours.

The site is far from just a Yellow Pages site. Avvo collects disciplinary records and makes them available. Britton started the company in 2005 and it now has 24 employees. It has raised $13 million to date from Benchmark Capital and Ignition Partners. Its closest competition are the online Yellow Pages, paid directories such as Lawyerfinder.com and search engines such as Google.