It’s estimated that by 2022, the number of connected electronics worldwide will hit 29 billion, of which around 18 billion will occupy the burgeoning internet of things (IoT) subcategory. Wrangling even a portion of these might seem like a Sisyphean task for enterprises, but Alexandros Marinos aims to make managing IoT devices as straightforward as configuring PC peripherals.

Marinos is the founder of Balena.io (formerly Resin.io), a provider of DevOps solutions for devices in verticals from robotics and manufacturing to transport and building management. Three years after the Seattle, Washington-based company’s founding in 2013, it managed to attract $9 million in venture capital from Threshold Ventures, GE Ventures, Ericsson, and Aspect Ventures. Now, on the heels of this and a subsequent $5 million in funding, Balena is gearing up for expansion, flush with $14.4 million raised in a series B round led by OpenView and existing investors. The infusion will fuel the growth of its workforce, which now stands at 45 employees across its Seattle headquarters and satellite offices in London and Athens, Greece.

Marinos, a graduate from the University of Surrey and the American College of Greece, says that the number of devices on Balena’s platform is growing at a rate six times year-over-year and that customer acquisition is on the upswing. Balena now counts Bosch, Booster, Allscripts, Tapp, Zume Pizza, OpenDoor, Sonder, smart home systems company Dwelo, smart roof startup Sense, HVAC monitoring and controls provider Enerbrain, and smart building controls developer Mount Kelvin among its customer base. 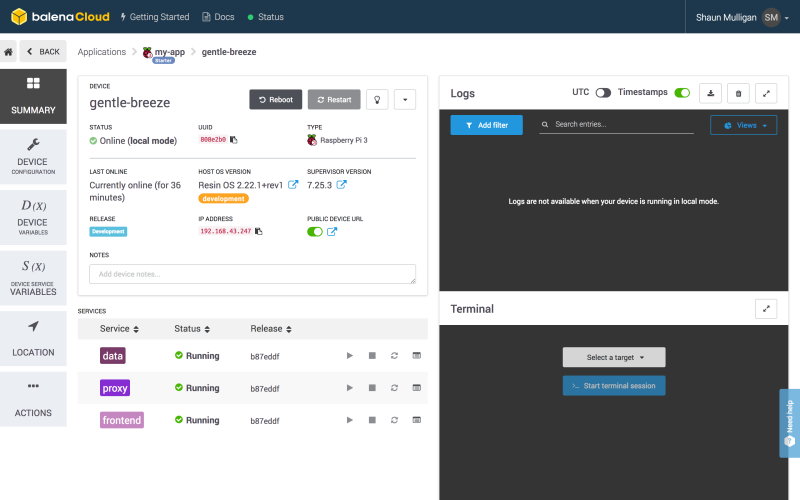 “As billions of complex devices come online, IoT project leaders are faced with the dual challenges of safety and speed. They must securely maintain mission-critical remote devices, while also delivering new software features and functionality to their customers,” Marinos said in a previous statement. “[We] are exceptionally well-positioned to help IoT project leaders use software as a strategic advantage.”

Balena’s eponymous platform builds on Docker, Git, Yocto, and other open source technologies to solve common problems in IoT device deployment. It offers a workflow targeting embedded Linux systems with a console that lets developers push updates to thousands of devices at once, and that delivers visibility into the health of device fleets.

BalenaCloud, Balena’s fully managed cloud service, comprises device and client-side software in addition to servers that autonomously package code into containers. As for BalenaOS, it’s a bare-bones Linux host OS that comes prepackaged with BalenaEngine, a lightweight and Docker-compatible container engine. BalenaOS shares a kernel with a host OS but otherwise works independently, and it’s responsible for kicking off the device supervisor and containerized services. Cleverly, it’s architected such that it’s able to continue running and pulling new code even if an app crashes, or to restore old firmware versions if a new version fails.

BalenaEtcher, a tool coded for device provisioning, complements BalenaOS. Provisioning keys for apps are embedded in BalenaOS image downloads, and when devices boot up for the first time, they use Balena’s provisioning API to register themselves. On the deployment side of the equation, built images are stored in Balena’s container registry, and the device supervisor is alerted that new app versions are ready. If a device is offline at the time, the device supervisor informs it about the new containers when it comes back online. 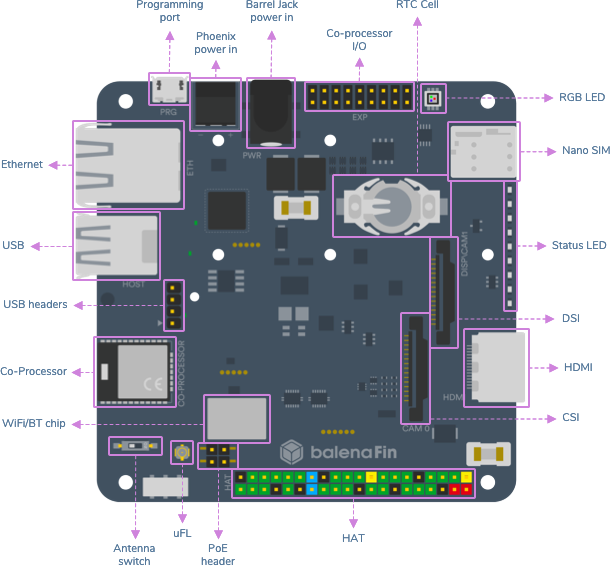 Above: A schematic of the BalenaFin development board.

Balena’s other nice-to-haves include support for bandwidth- and storage-saving delta updates, which tell the supervisor to download only the binary differences between the old and the new images, and a built-in web terminal that lets users SSH into any running services or the underlying host OS. BalenaCloud also boasts a download progress monitor and device supervisor logs window, both of which can be filtered by service, device, and app.

Customers who prefer a self-hosted approach can opt for OpenBalena, a freely available collection of backend services and components underpinning BalenaCloud. It’s managed via the Balena command line interface, which can be used to configure app containers, push updates, check status, view logs, and more.

Balena says that both BalenaCloud and OpenBalena are compatible with Intel’s NUC, the Nvidia Jetson TX2, and dozens of other device types from Arm, Variscite, Up, Odroid, and others. Additionally, Balena offers its own carrier board based on the Rasberry Pi Compute Module — BalenaFin — outfitted with storage up to 64GB, a PoE-compatible power connector, Wi-Fi and Bluetooth connectivity, and multiple interfaces including HDMI, MIPI, I2C, SPI, UART, and GPIO.

Balena has competition in Microsoft’s Azure IoT Edge, which supports a full range of containerization and isolation features. Another heavyweight rival is Google’s Cloud IoT, a set of tools that connect, process, store, and analyze edge device data. Not to be outdone, Amazon Web Services’ IoT Device Management tracks, monitors, and manages fleets of devices running a range of operating systems and software.

But Balena’s clearly betting the IoT device management market, which is anticipated to reach $5.1 billion by 2025, is ripe for disruption. Time will tell.