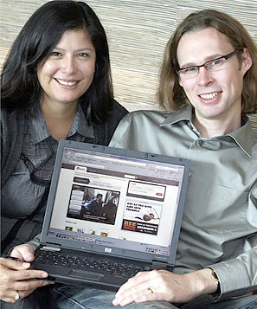 Social network Bebo has taken a page from Facebook. It has launched its own, full-blown developer platform that, like Facebook’s, gives third-party developers deeper access to its user data.

In fact, Facebook worked directly with Bebo on its platform to ensure that Facebook applications can be easily ported over to Bebo without developers having to re-write much code.

UPDATE: This is part of a larger Facebook effort to make its platform compatible with other social networks.

Bebo, which claims 40 million total users worldwide, has in turn promised to keep pace with Facebook — it will continue developing its platform to match any new features on Facebook’s platform.

The closeness of the two companies is surprising, given that Bebo is also allied with Google, whose OpenSocial development platform, rivals Facebook’s.

But Facebook and Bebo are working together because, apparently, they see themselves as providing users with somewhat distinct services. Bebo sees itself as a place for teenage self-expression while Facebook sees itself as a network that reflects its users’ real-world relationships.

Facebook’s platform is also more immediately valuable to Bebo: It has been live, and used intensively by thousands of third-party developers since it launched in May, while OpenSocial’s still struggling to ready itself for prime time. See our earlier coverage.

If Bebo really has created a unique place for teen self-expression, then developers will see teen-focused applications become relatively more popular on Bebo than on other social networks’ new platforms, such as Hi5’s and Friendster’s.

“Using Facebook is like hanging out in a wine bar,” Bebo cofounder Michael Birch (pictured above with wife and cofounder, Xochi) told me earlier this year, referring to Facebook’s carefully austere site design and its overall preppie image. Going off that analogy, Bebo is more like a karaoke club for high school kids.

Bebo has planned its launch partners around its target demographic. For example, teen virtual world Gaia Online has created “Gaia OMG,” an application that lets Gaia users access the site while inside Bebo.

Of course, it’s hard to tell how distinct Bebo is to its users. Every social network, including Facebook and Myspace, offers online photo albums, video uploads and other avenues for self-expression.

To promote its teen-media image, Bebo has already gone as far as funding user-created content. It has also tried to get large media companies involved — and comfortable having their material shared and commented on by Bebo users. Its “Open Media” platform lets media companies syndicate videos, music and other content for free, using their own video players and selling their own advertising.

The overlap between Bebo and Facebook leads to other interesting opportunities for developers. The two companies’ platforms let developers build applications that interoperate between the two sites. One example: A Facebook game application developed by Bunchball, will now let users play each other across Bebo and Facebook.

Bebo and rivals like Friendster, are also setting a trend — they are making their platforms compatible with both Facebook’s platform standards and Google’s OpenSocial standards.