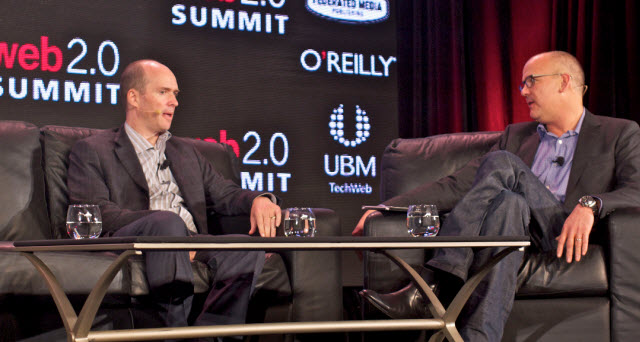 They hope to capitalize on their fame going back to the days of the founding of Netscape, their startup successes, and their love for technical CEOs to beat other venture capital firms to the best new startups. Horowitz also said he hoped to be more transparent about his firm’s approach by telling entrepreneurs what his company is doing.

Horowitz reflected on what it was like to start Netscape, which went public in 1994, just 15 months after its founding by Andreessen. He said that kind of accelerated growth, which is not so uncommon anymore, is tough on founders who have to learn how to run a big operation under the public limelight. Back in the old days, it was common for venture capital firms to bring in professional CEOs to run a company after the founders got it off the ground.

But based on their experience, Andreessen and Horowitz say they don’t want to push founders out of companies.

“Today it would be nuts to replace guys like Mark Zuckerberg (founder of Facebook), Dennis Crowley (founder of Foursquare), and Mark Pincus (founder of Zynga),” Horowitz said in a conversation with journalist John Heileman at the Web 2.0 Summit in San Francisco today.

“We wanted to design a venture firm to help technical founders become CEOs rather than replace them,” Horowitz said.

Founders can make good CEOs because they know every decision the company has made, they understand customer feedback, and have the “moral authority to make decisions,” Horowitz said.

If there are mistakes to learn from, the founding CEOs are the best ones to recognize them, Horowitz said. The founding CEOs also have a clear commitment for the long-term, not the quarterly view.

“That is hard for a professional CEO to do, and having the moral authority can be very powerful,” he said.

Founders aren’t perfect, but Horowitz felt that venture capitalists developed a bias against founders as CEOs. Offering advice to founders about how to avoid pitfalls as CEOs is something that helps distinguish Andreessen Horowitz, according to Horowitz.

“Entrepreneurs come to us because, if you take money from us, the engineers you hire have heard of the investor,” Horowitz said. “That makes them more comfortable about taking a job.”

That matters these days when the ability hire good engineers is becoming harder in places like Silicon Valley, were certain kinds of talent are in short supply, despite the recession.

As for major trends, the “giant trend” is the shift from early web-based businesses, or Web 2.0, to a new kind of business. These businesses use cloud computing in the back-end data centers and mobile computing on the front-end.

“It’s the biggest change since we moved from mainframe computers to PCs,” Horowitz said. “It is changing the way that networks are being built.”

Heileman got Horowitz to make comments about some of the fund’s investments. Horowitz said he felt like Facebook is one of the best-run technologies companies. He said Groupon is the fastest-growing company in the history of business. He said Instagram is very innovative. Rockmelt has a great team with a great idea. Twitter is changing the world. He loves Zynga.

As for Steve Jobs, Horowitz said, “It’s spectacular what he did for the world and his life. People have compared him to Thomas Edison. That’s right in terms of the importance of the impact he has had on the world.”