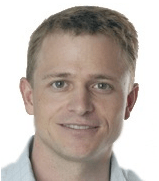 Benchmark Capital’s Peter Fenton scored two exits in one day — a rarity in the world of venture capital.

Fenton was the lead partner behind SpringSource’s $420 million sale to VMWare, the company’s biggest acquisition yet, and FriendFeed’s sale to Facebook. A competitive triathlete, Fenton has his hands in several of Silicon Valley’s most talked-about companies: He joined Twitter’s board of directors in its most recent fundraising round and holds a seat on Yelp’s board, after investing with the company in 2006. Founded in 1995, Benchmark Capital manages about $2.5 billion and has landed other big deals including its initial investment with eBay.

Back in 2006, VentureBeat editor Matt Marshall wrote about Fenton’s strategy for investing: Wait until right before the company’s rising “adoption curve” meets the declining “risk curve.” Heady stuff, but it apparently works. “The challenge is to identify the acceleration/adoption phase before it’s obvious,” he said at the time. He made good money backing Wily and JBoss that way. And he followed a similar strategy with SpringSource, where he invested $10 million into the company after it had already reached what he calls a “critical mass” of developers. Here’s the full pdf on his strategy. Chart is below.

Back in 2006, we also asked who was the best VC under the age of 40, and Fenton was voted second, losing by a hair to Danny Rimer, of Index Ventures (see bottom). 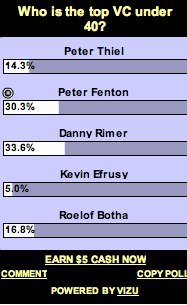