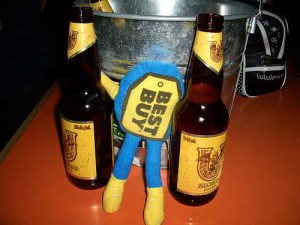 Anyone who has stepped into a Best Buy retail store has seen its rows and rows of DVDs. But as the physical media market starts to wane, Best Buy is setting its sights on a new frontier — digital downloads. Sources close to the studios say the electronics retailer is preparing to launch a movie download service as early as this summer, reports Variety.

Details are still sketchy, but Variety’s sources say Best Buy will probably follow in the footsteps of Blockbuster by forging a partnership with movie download service CinemaNow. Ideally, the agreement would allow the retailer to sell specially branded web-ready hardware (TVs, set-top boxes, Blu-ray players, etc.) that ships with automatic access to CinemaNow’s 14,000 feature-length titles. Since the goal is to offset Best Buy’s lagging DVD sales, speculation is pointing to a pay-per-download setup for the rumored service.

It’s hard to say whether this move is audacious or desperate. On one hand, Best Buy is smart to capitalize on the evolution of living room entertainment. After all, web-enabled TVs were all the rage at CES this year, and next week’s NAB conference is slated to reveal even more strides in that space. Likewise, the popularity of Tivo has made the set-top box a must-have (and easily expandable) device for the living room. If Best Buy were to forge a solid enough agreement with manufacturers to get its fledgling service on their products, it might actually stand a chance (pricing and content catalog permitting).

Of course, there’s also the issue of timeliness in a crowded market. Digital media A-listers like Apple, Amazon, Netflix, and Blockbuster are already fighting it out in this space — and that’s not even taking into account past failures like Wal-Mart’s movie download pact with HP. If Best Buy wants to evolve its brick-and-mortar DVD sales into movie downloads, then it’s going to need more than a CinemaNow partnership. For success, it’ll also have to pile on wide support from hardware manufacturers, high-level studio backing, an intuitive user interface, and movies. Lots and lots of must-have movies.