Now that its file synchronization tool has received a few updates, BitTorrent is going on the offensive against cloud-based storage services by showing off just how fast BitTorrent Sync can be. More specifically, the company conducted a test that shows Sync destroys Google Drive, Microsoft’s OneDrive, and Dropbox.

The company transferred a 1.36 GB MP4 video clip between two Apple MacBook Pros using two Apple Thunderbolt to Gigabit Ethernet Adapters, the Time.gov site as a real-time clock, and the Internet connection at its headquarters (1 Gbps up/down). The timer started when the file transfer was initiated and then stopped once the file was fully synced and downloaded onto the receiving machine. 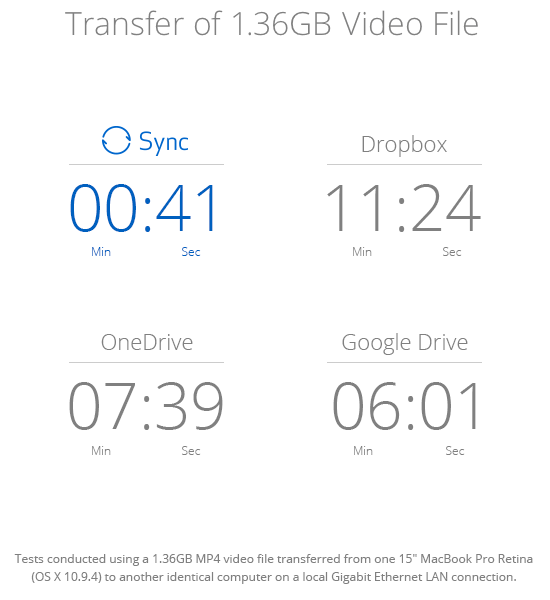 Sync’s time might seem ridiculously low, almost as if the Internet wasn’t involved at all. You have to remember, however, that BitTorrent’s headquarters has a ridiculous fast connection both downstream and upstream.

BitTorrent ran three tests for each service: In the morning at the start of the workday, in the afternoon, and in the evening when the company’s San Francisco office was mostly empty and Internet use was at a minimum. The above times are averages for each of the three times.

Running our own test

The results are impressive, and while we didn’t doubt them given how Sync is designed, we figured doing the test ourselves was worth a shot.

BitTorrent made a persuasive argument in its blog post:

It’s important here to note that Dropbox, Google Drive and Microsoft OneDrive all rate-limit uploads and do not fully utilize the 1 Gbps bandwidth available (in regards to the office Internet connection, not the LAN switched). We’re confident that a slower Internet connection would yield similar results.

Most people don’t have access to such speeds. My ISP, for example, claims I have a 35 Mbps up and 3 Mbps down connection, which is certainly slower than the above. I do sometimes get faster speeds than that, especially if I’m transferring over FTP or BitTorrent, but I honestly wasn’t expecting anything too crazy in this case.

Nonetheless, I grabbed the first four episodes (1.37 GB) of The Wire, which just so happens to be one of the best TV shows ever made, and downloaded Sync onto my Windows desktop. I then sent the link along to my laptop, grabbed Sync there as well, and hit approve to get things rolling: 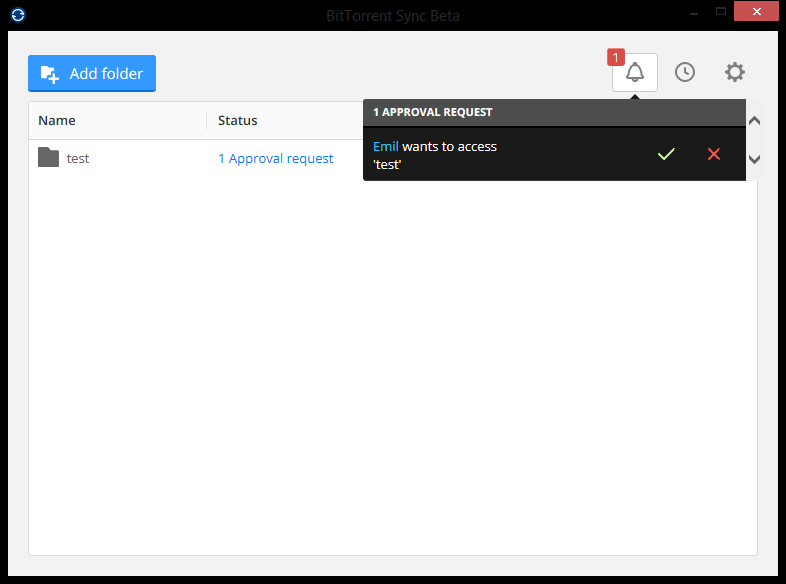 The whole process was done in 1 minute and 6 seconds, according to the timer on my Nexus 5. Yet this is for a test performed on the same network. What happens if I want to send the episodes to my friend across town?

The transfer process was much longer. Times were in the double digit minutes, and largely depended on what connections my friends had.

Yet it’s worth noting that Google Drive, OneDrive, and Dropbox still performed worse. They were limited by the same download bandwidth, but the upload section of the process was notably much slower (many ISPs worldwide offer much slower upload speeds than download speeds).

The reason Sync is so fast comes down to the fact that it is based on the BitTorrent protocol. This means it is designed to take the shortest and fastest path when getting file pieces from one device to another, and it doesn’t have to rely on third-party servers that are typically involved when sending files via cloud services.

That being said, your mileage will definitely vary. You may find that OneDrive is faster than Google Drive, or that Dropbox is king. Sync will definitely be the fastest if you and the receiver are on the same network or physically close (that’s exactly why BitTorrent is trying to pitch Sync to businesses, especially if they need to transfer files between different operating systems).

Of course, it’s possible that Sync will not be the fastest for you, especially if you and the receiver are close to a Google, Microsoft, or Dropbox data center. Sync should win if it can max out your connection, but if for whatever reason it can’t (factors include your ISP, time of day, and overall congestion on the network), the alternatives are certainly good ones.

At the end of the day, Sync may be the fastest in most cases, but speed probably isn’t the only feature you want.