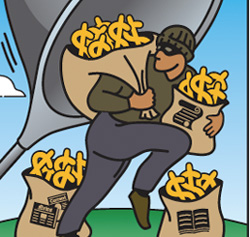 In response to my post yesterday, “Book industry nears its Napster moment,” copyright protection company Attributor pointed me to a recent report in which Attributor claimed that unauthorized copies of digitized books have already cost American publishers $2.8 billion dollars in lost sales.

The report says Attributor’s anti-piracy service, FairShare Guardian, tracked illegal downloads of 913 different books for a 90 day period. The company estimated there were more than 9 million downloads of pirated copies of these books. By extrapolating across the industry and over time, they came up with the multi-billion-dollar figure.

“On average, nearly 10,000 copies of every book published are downloaded for free,” the report concludes. Business and investing books are stolen the most, at an average 13,000 copies per title. Technical and science books are also widely bootlegged. Attributor estimates these types of books can lose as much as $1 million each in sales.

The table below shows the sites on which sites the most downloads were spotted. 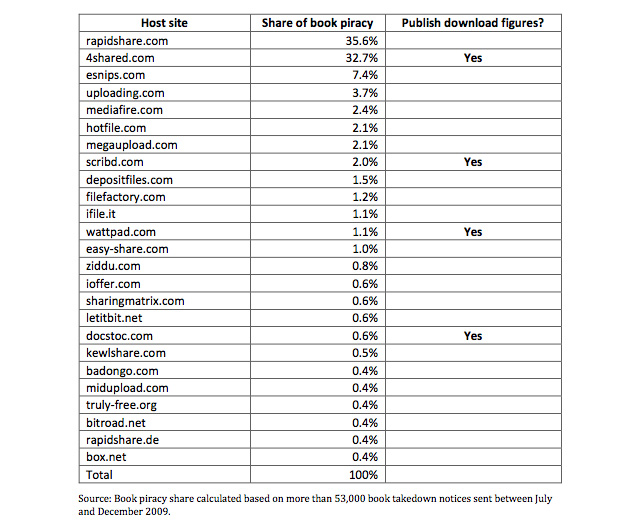 Redwood City-based Attributor sells a solution for authors and publishers to find and shut down copyright breakers. So this study should be read with the same skepticism as the weekly alerts from anti-virus companies. Whether or not the $2.8 billion figure is money that book publishers could have made, the download stats prove that books, like music and video and software, will be ripped and burned in large quantities.

Attributor’s plan is crafty. The company doesn’t try to shut down pirate sites. Instead, it goes after the ad networks most of them use to make money by showing ads on the download pages for ripped books. Attributor tries to get the ad network – Google, Yahoo, AdBrite — to withhold a percentage of the money they would pay to the site’s operator, and give it to the book’s copyright holder instead.

The New York Times reported last year that Google and Yahoo “have reacted coolly to the proposal.”

On the other hand, Turner Broadcasting System has partnered with Attributor to track both legal and unlawful uploads and downloads of video content from CNN, TBS and Cartoon Network.

These publishers, often portrayed as do-nothing dullards by Internet pundits, are actually exploring many widely different options in search of a profitable way to embrace the Internet’s ever-expanding reach. Attributor’s model is about as Net-savvy as you can get: Instead of deeming people pirates, it offers to turn them into Amazon-like affiliates.

Attributor, founded in 2005, has collected at least $22 million in funding, most recently from a $12 million round backed by JAFCO Ventures and Sigma Partners. Prior investors include Sigma Partners, Selby Venture Partners, Draper Richards, First Round Capital, and Amicus Capital.