Brave today rolled out Brave Ads, its digital advertising model, to desktop users in Canada, France, Germany, the U.K., and the U.S. That’s right — the ad-blocking browser is getting ads. Brave users can now earn its cryptocurrency Basic Attention Tokens (BAT) for viewing the browser’s built-in ads. To get the new feature, you’ll have to download Brave version 0.63 for Windows, macOS, or Linux.

Brave is a Chromium-based open source browser developed by Brave Software, led by CEO Brendan Eich, best known for inventing JavaScript and cofounding Mozilla. Eich is now on a mission to “fix the collapsing internet.” Brave’s digital advertising platform aims to “repair a broken digital ad ecosystem — one that is invasive and riddled with fraud” while also helping users “reclaim their own data privacy.” 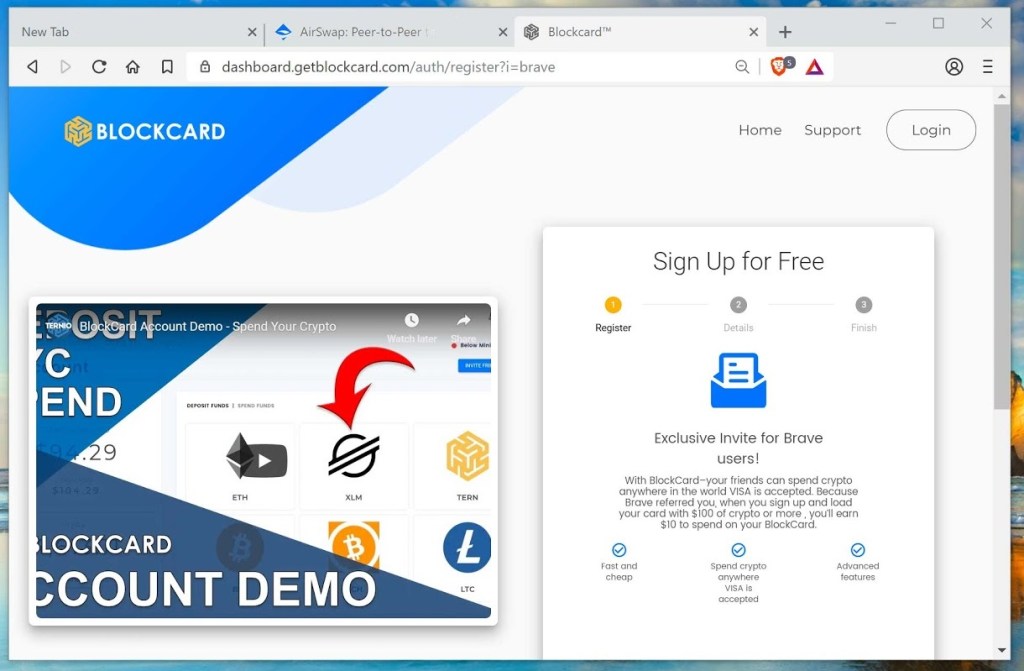 Brave announced its digital ads platform in June 2018. Developer and beta users started testing it in January with some 250 ads, and now it’s rolling out to all Brave users with over 500 ads. The feature is, however, optional: You must opt into the browser’s integrated Brave Rewards (brave://rewards/) and then turn on Ads. In return for your attention, you’ll receive 70% of the gross ad revenue, paid out with BAT. Brave keeps the remaining 30%. At the end of the Brave Rewards monthly cycle, you claim the accumulated tokens and either donate them to your most visited sites or tip your favorite content creators.

Brave Ads let brands highlight offers, promote content, and engage users while reducing the chance of fraud associated with middlemen in digital advertising. The pitch is simple: Because Brave Ads are opt-in, brands know their ads are viewed by users who welcome advertising. 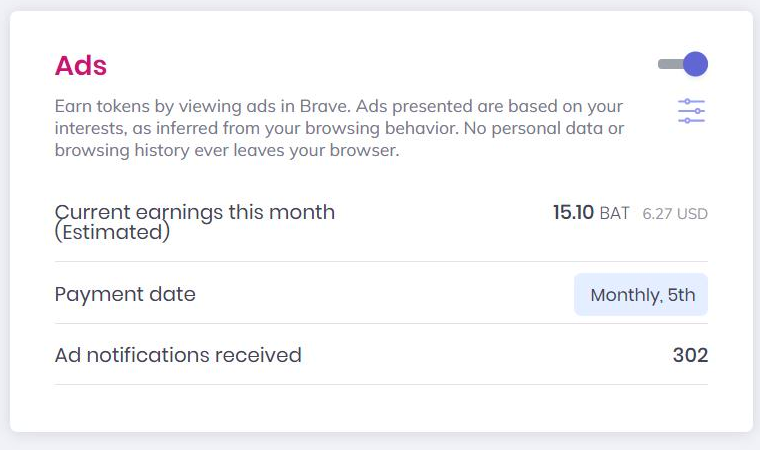 Brave Ads so far includes several ad networks and brands. The company named a few: In addition to BuySellAds, TAP Network, AirSwap, Fluidity, and Uphold, which were part of the early access program, Vice, Home Chef, ConsenSys, Ternio BlockCard, MyCrypto, and eToro are now also supplying ads. Additionally, the Giving Block is providing ad inventory and test use cases for their partner charities and nonprofits while The Human Rights Foundation is testing tipping through Brave Rewards.

“With Brave Ads, we are launching a digital ad platform that is the first to protect users’ data rights and to reward them for their attention,” Eich said in a statement. “Brave Ads also aim to improve the economics and conversion of the online advertising industry, so that publishers and advertisers can thrive without the intermediaries that collect huge fees and that contribute to web-wide surveillance. Privacy by design and no tracking are integral to our mission to fix the Web and its funding model.”

Brave blocks ads and cross-site web trackers out-of-the-box. Brave Ads are thus separate from existing web ads — they don’t appear in the same places. In fact, they appear as notifications while you browse the web “at a time that the browser finds appropriate and not disruptive.” If you click to engage with one, Brave opens a full-page ad in a new tab. 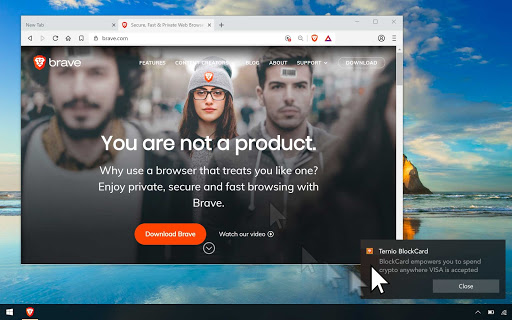 By default, Brave Rewards shows you two ads per hour. You can adjust this number to anywhere between one and five ads per hour (click the BAT triangle in the URL bar => Rewards Settings => Ads). Brave Ads are supposedly “privacy-preserving.” Unlike conventional digital ads, ad matching happens directly on your device, meaning your data is never sent to anyone, not even Brave.

While the privacy part is critical to convincing users, it’s still going to be an incredibly hard sell. Brave users like the fact that the browser blocks ads by default. Asking them to turn ads back on, even if they’re “better” ads, will be an incredibly steep uphill battle.

Without being able to use tracking, Brave had to figure out another way to make Brave Ads viable. The process starts off by Brave pushing ad catalogs (one per region and language) to available devices. As you browse, Brave learns about your interests based on the content of sites you visit. It then locally matches the best available ad from the catalog.

Brave says it has implemented user modeling to integrate specific usage of the browser into its system. Using machine learning, Brave’s ad system can deliver ads “at the right time” based on the user’s “behavior in the browser.” We asked the company which factors it takes into account to make this possible, but it didn’t elaborate.

Brave Ads is desktop-only for now, but the company promises the feature will hit Android and iOS “in the coming months.” It will also be rolled out to more countries later this year.

Brave also plans to let its users buy “premium content” with BAT and redeem it for real-world rewards such as hotel stays, restaurant vouchers, and gift cards via TAP Network‘s 250,000 brand partners. Even more useful, Brave is working on an option to let users withdraw BAT from their wallets for personal use, converting BAT to a local fiat currency through exchange partners.

On the ad side, Brave wants to let publishers integrate ads themselves later this year. The company wants its 55,000 verified publishers and creators to feature private ads within their website or channels. These ads will give publishers and content creators 70% of the revenue share, with 15% going to users and the remaining 15% going to Brave.

It’s clear Brave isn’t sure which of these ad strategies will work, but it’s willing to try them all. Unsurprisingly, the company’s mission to reform online advertising involves more than just blocking ads.