It has been a whirlwind 12 months for fledgling fintech startup Brex, which launched last June with $57 million in funding from some big-name investors, including PayPal’s founders and Y Combinator. Brex, which has created a corporate credit card for startups and scale-ups, raised another $125 million series C round in October, at a valuation of $1.1 billion, and made its first acquisition (a blockchain startup, no less). It also raised an additional $100 million debt round a couple of months back.

Today, Brex has announced another $100 million in funding in a series C extension round led by Kleiner Perkins Digital Growth Fund, with participation from existing investors, including  Y Combinator Continuity, GreenOaks Capital, IVP, Ribbit Capital, and DST Global. This takes Brex’s total equity funding to $315 million, with a valuation of $2.6 billion — a considerable growth trajectory for a company founded in 2017 that has been widely available for less than a year.

By way of a quick recap, Brex launched as a corporate credit card for startups, which typically find it more difficult to gain access to lines of credit from traditional lenders. Brex effectively serves as an underwriter and sets credit limits based not on credit history, but on factors such as who has invested in the startup and the equity they hold and the startup’s cash balance and spending patterns. Startups don’t pay any fees for the first five cards, after which they pay $5 per month for each card — of course, Brex also makes money from transaction fees similar to other credit cards.

Brex offers a number of other useful features, such as the ability to capture receipts with a smartphone camera and match them to a statement, and it directly integrates with accounting tools, including QuickBook, Expensify, and Xero.

Brex was cofounded by Brazilians Henrique Dubugras and Pedro Franceschi, known as the teenage creators behind online payments processor Pagar.me, which they sold for an undisclosed sum in 2016. Fast-forward to March, 2017, when Brex was born, this time in Silicon Valley and with a vast target market spanning the entire U.S. 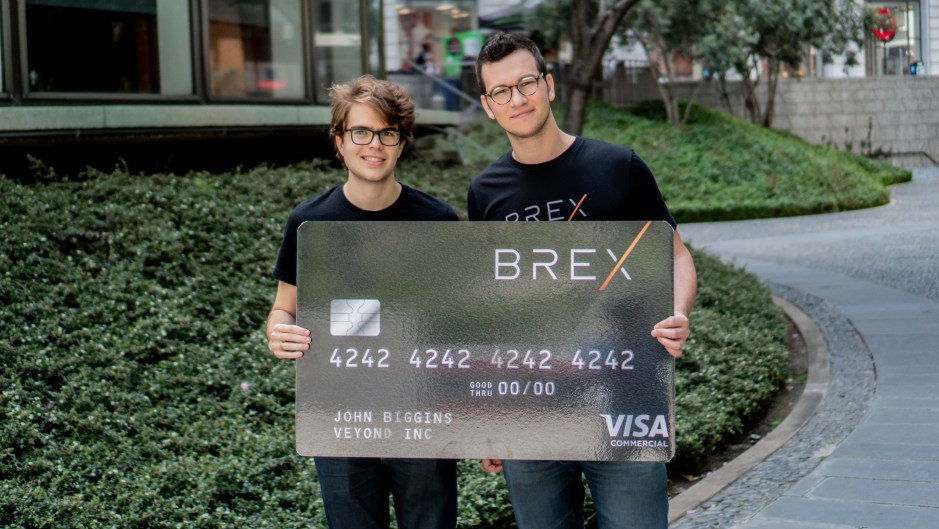 After graduating from Y Combinator, Brex went on to accumulate around 1,000 customers during its private launch, including Affirm, Algolia, Flexport, and Y Combinator itself. Though Brex’s initial offering was aimed at startups, it has expanded its focus to larger tech companies and specific verticals such as ecommerce.

With another $100 million in the bank, Brex will invest in specific spend-management features, its rewards program that launched back in October, and efforts to target new customers.

“At Brex, we build corporate payment technology to accelerate entrepreneurs and scaling companies,” said Dubugras, who serves as co-CEO. “We recognize that each business is unique and therefore tailor our product to meet their specific circumstances. With this new funding, we can deliver relevant and unique financial products to an increasingly broad customer base.”