A123 Systems, maker of lithium-ion batteries — primarily for hybrid and electric cars — has nabbed another $15 million in funding from General Electric, marking the seventh time the conglomerate has invested in the capital-rich startup. This brings the total of A123’s recent round of financing to $69 million.

The Watertown, Mass.-based company says it plans to use the money to construct battery factories in Michigan close to its key automotive clients. These days, it’s rare for a company to actually be bringing manufacturing jobs to the state, where the restructuring of General Motors and its peers has hemorrhaged workers. But several of the region’s largest companies have struck deals with A123 to use its batteries, including Chrysler, which needs battery packs for its new versions of the Jeep Wrangler, Jeep Patriot and Chrysler Town & Country. As long as Chrysler avoids bankruptcy, this is good news for Michigan and its governor, Jennifer Granholm, who has promised a surge in renewable and other green economy jobs to make up for the flagging car industry.

A123 says the factories it plans to roll out will be able to produce battery systems for more than 5 million hybrid electric cars and 500,000 plug-in electric cars by 2013. This volume would significantly lower the cost of each individual battery pack, helping to buoy the burgeoning future car market. Of course, with no plug-in electric models in showrooms right now, it’s difficult to gauge how successful they — and A123, accordingly — may be. Some have pointed to a small drop-off in the hybrid car market as an indication that the company won’t be able to sustain itself in the long run. But with a full pipeline of highly anticipated, battery-powered cars set to launch next year, this analysis seems a bit premature.

And even if these models are slow to catch on, A123 has a whole other segment of its business devoted to smart grid and energy storage that is almost certain to take off as soon as the stimulus funds and energy bill take effect. In fact, the company plans to allocate some of the money raised in the recent funding round to developing renewable energy storage solutions. 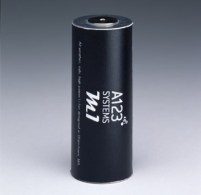 Holding on to the intermittent power generated by wind farms and solar arrays has become a top priority for grid engineers looking to ensure not only consistent, but also more cost-effective sources of energy. Being able to draw from a stored pool of power during peak periods — instead of cranking up plant operations — would save utilities (and consumers) a substantial amount of money. And with at least $2 billion in stimulus funds being funneled into batteries used for this type of storage — grabbing the attention of VCs — A123 should remain fairly recession resistant.

Regardless, General Electric seems fairly optimistic about both applications of the company’s technology. It has contributed $70 million to the company total. This gives it a 10 percent stake in A123, which has raised over $300 million to date. Its other backers include Alliance Capital, FA Technology Ventures, North Bridge Venture Partners, Sequoia Capital, OnPoint, MIT, Motorola, Qualcomm and Desh Deshpande, the company’s chairman.