European online auction house Catawiki has raised $82 million in a Series C round led by New York-based Lead Edge Capital, with participation from previous investors, including Accel and Project A Ventures.

Founded out of Amsterdam in 2008, Catawiki focuses on “specialist” items aimed at collectors. For the past four years, the company has held weekly auctions across sixty categories, covering jewelry, stamps, coins, classic cars, and more. It has claimed some unusual items lately, too — including a strand of Napoleon’s hair and the jawbone of a tyrannosaurus rex.

But this isn’t an eBay-style free-for-all — category experts are on-hand to supervise the auctions and ensure the goods on offer are of good quality. 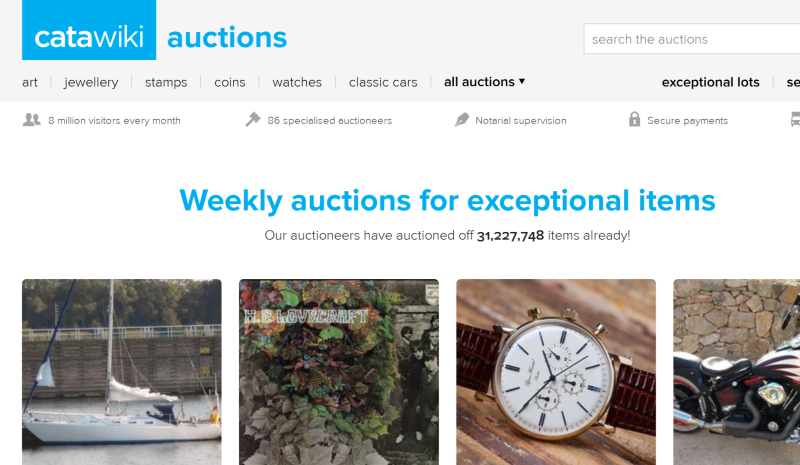 This latest round takes the company’s total funding past the $95 million mark, after the $12.8 million raised last December, and a previous $1 million Series A round. But the company says that it “has not spent much” from that previous round — the latest cash influx will be added to the pot, and help it expand to more markets around the world.

“We have grown exceptionally fast while not spending much money from the last funding round,” says Catawiki CEO René Schoenmakers. “This investment will allow us to roll out many exciting new product features on our platform and open up new markets even faster than originally planned.”

Catawiki does actually have buyers and sellers from around the world, but Europe is where most of its business takes place for now. Indeed, the company counts 200 employees, all in Europe, and officially operates in its native Netherlands, the U.K., Italy, France, Germany, Spain, and Belgium. The cash will be used to expand in these markets, and to enter new markets in Europe and elsewhere, with a Chinese-language version of the site launching imminently.

Lead Edge Capital partner Lorrie Norrington, who used to be president of eBay Marketplaces, is joining Catawiki as an advisor.

Though this represents one of the biggest funding rounds raised by a Dutch company, it isn’t the biggest by quite some distance — indeed, Amsterdam-headquartered payments company Adyen raised a whopping $250 million back in December.