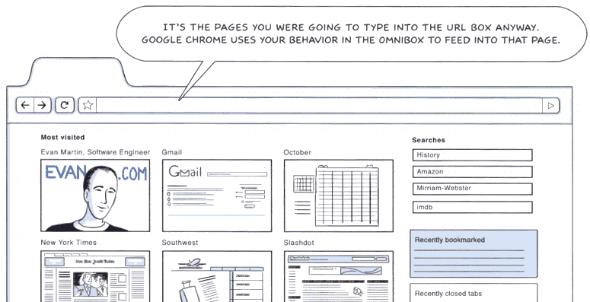 Google is working a new web browser, called Chrome. The software may be available for download as early as tomorrow. In the meantime, Google has mailed a comic book about the browser to Google Blogoscoped. Going by the comic book, Chrome is open-source, and boasts interface and performance features that certainly sound appealing.

Chrome will feature the Google search box, as Firefox does as part of its Google subsidy, while Microsoft’s Internet Explorer features Microsoft search. This is a browser battle in the search market-share war, but a lot more.

Google is making a bid for the many companies and independent developers, who have already appreciated Google’s financing of Firefox as it has increased market share against IE around the world. Chrome, like Firefox, will have its code as open-source, to let developers build a wide variety of plugins as they already have on Firefox.

In terms of interface, Chrome will offer a thumbnailed start page, showing you your nine most visited pages and other, recommended pages. The side of the page will show recently bookmarked pages and searches. Seems like a good spot for some contextually targeted Google ads, too. Google’s search box in Chrome (see top comic) will also feature these related results.

Google is also making changes to tabs and windows. The interface will also show tabs above the web address bar, whereas other browsers show tabs beneath the address bar. One feature will let you keep a particular page hidden the browser history and other means that browsers keep track of your behavior. Will Google still track what hidden pages you visit, I wonder? 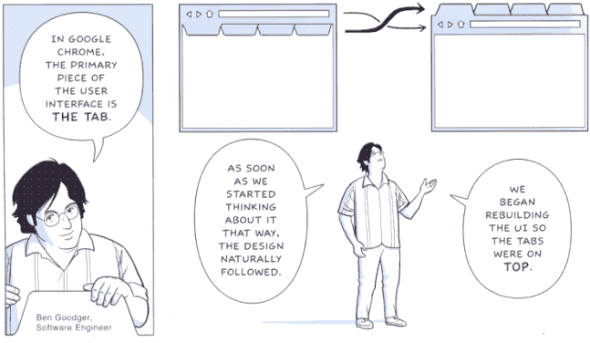 Chrome’s performance, meanwhile, has gotten a boost. It uses Webkit, the browser rendering engine already used by Apple’s Safari browser. But Chrome will be able to load Javascript, software code used in many web page features, faster than current browsers. Chrome will be constantly downloading lists of harmful sites to warn you about. It will tell you when particular web site pages have trouble loading — due to problems on the site’s end, not your’s. While a single problematic page can cause an entire browser to crash, Chrome will solve that problem. Any tab that experiences problems will instead just crash the tab, which you can then close. Chrome, like Firefox, will include integration with Gears, Google’s component for accessing web site features while you’re offline.

There are all sorts of questions now. What about Google’s support of Mozilla, just renewed for another three years? What about Ubiquity, another next-generation browser that Mozilla is working on ?

And, how will this fit in with other efforts? I hear that Android, Google’s mobile operating system software that has yet to launch, currently has all of the company’s assets at its disposal.