In San Francisco, an obscure municipal website provides the results of restaurant inspections. These are available to the public, but the site gets essentially zero traffic, and many of your favorite restaurants might not be as hygienic as you’d think.

(Check out this San Francisco Chronicle article from January that documents this rather graphically.)

CleanScores wants to change that. It wants to be the Zagat’s of restaurant hygiene and make food safety a major factor when people decide where to eat.

To this end, it is creating a system to standardize and score hygiene reports across the country and has designed big blue placards. These placards feature a restaurant’s health rating in bold and, CleanScores, which is starting in SF, sent a handful of them out to various well-rated restaurants in San Francisco’s Cole Valley neighborhood. According to the company, 80 percent of these target restaurants put the placards up on their windows.

The idea for Palo Alto company came about when a Stanford MBA candidate named Guy Michlin and one of his professors, an economist named Phillip Leslie, sat down and discussed Leslie’s work.

Leslie had previously been at UCLA, where he’d studied the effects (pdf) of Los Angeles’s initiative to make restaurants’ hygiene records public through “grade cards” that restaurants had to display. He and his colleagues found that one year after the introduction of grade cards there was a 13.1% drop in foodborne-illness hospitalizations throughout the city. The trend slowed down, but continued for the next two years. CleanScores says that the Los Angeles restaurants with high health grades also saw a six percent boost in revenues.

Michlin and Leslie decided to start a company to take this grade card idea, create a standard rating system, and scale the concept nationwide.

CleanScores currently has a website that allows people to find San Francisco restaurants’ ratings, but Michlin says a destination site is unlikely to succeed. He hopes to gain distribution for the ratings by sending out a round of free placards to select restaurants in the city, and pushing the ratings to sites like Yelp! and Citysearch. The idea is that once enough prominent restaurants display the placards, those without them will be pressured to follow suit.

Eventually, the thinking goes, the placards will be so prolific that restaurants without them will draw suspicion.

CleanScores  then intends to charge participatants a yearly subscription Each placard will be valid for three months, and will say so prominently, pushing restaurants to keep current.

This is a bit of a shakedown, and we wonder whether cost-conscious restaurants will go along with it. If it’s true that restaurants with high, publicly displayed ratings get up to a six percent boost in revenue, this off-kilter concept may actually have legs, and it’s not hard to envision a partnership with Zagat’s down the line. 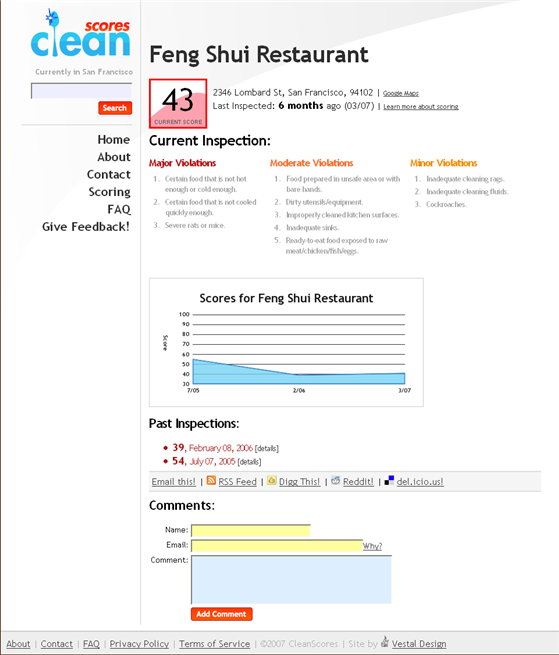