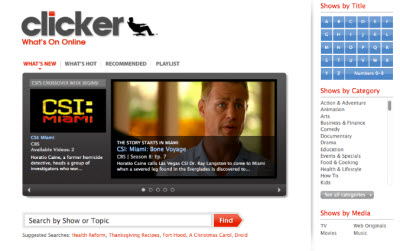 Video web site Clicker Media is formally launching its service today which gives online users a real TV Guide-style search engine for television content online. The goal is to give users access to a massive playlist of TV to watch on the web.

The Los Angeles-based company indexes all available video online, from Netflix movies TV shows to Amazon film downloads. There are more than 400,000 episodes indexed online, all available as legal content. It lets you discover what’s available to watch and where to view it on the web. The site draws from 1,200 sources and categorizes shows into 1,200 areas. 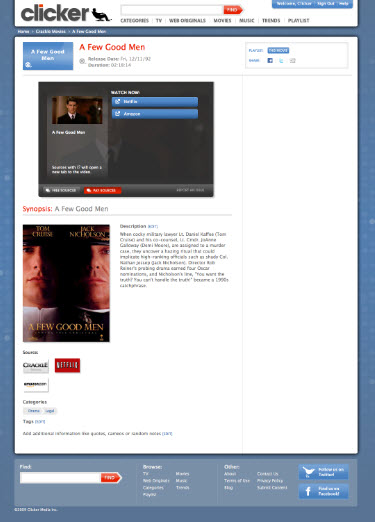 There are 30,000 movies available fro Netflix’s Instant Streaming service and Amazon’s Video on Demand service. It also catalogs more than 50,000 songs from 20,000 artists. If you want to share film lists or other info, you can do so via the site’s integration with Facebook Connect.

Users can use it much like Tivo for the Internet. They can queue shows to watch, get season passes, and get alerts when new episodes show up online. The company is headed by Jim Lanzone, former chief executive of Ask. He says that the idea is that there is so much available on the web now, you have to have an easy way to search it.

The service has been in private beta testing since mid-September. Fans can make their own comments and upload their own content. You can search for topics within a specific program. For instance, you can look for “Bill Gates” appearances on the Charlie Rose show. The index will also suggest shows based on what you’ve watched.

The company was founded in January and it raised $8 million in a first round from Benchmark Capital and Redpoint Ventures. Blake Krikorian, founder of Sling Media, has joined the company’s board of directors. Rivals include Hulu.com and Blinkx.