In recent years, a growing number of coding boot camps have helped address the large gap between available software engineering positions and qualified candidates to fill them. Coding bootcamps have been so successful that observers have wondered whether these programs are beginning to replace traditional college computer science degrees. For example, Aaron Skonnard, the CEO of Pluralsight, argues in Edtech’s Next Big Disruption Is The College Degree that college degrees will be replaced by “a new array of modern credentials that are currently gaining mainstream traction as viable measures of learning, ability and accomplishment.”

A drop in the number of computer science degrees followed by a rise in the number of coding bootcamp graduates appears to support this notion. Are coding bootcamps causing a reduction in computer science degrees? Or are they simply responding to a reduction from some unknown cause (for example, cost, increased difficulty perception, other more interesting degrees, etc.)?

The U.S. Department of Education’s National Center for Education Statistics, which collects, analyzes, and shares data on American education, has published extensive information about the history of bachelor’s degrees, which shows a drop in the percentage of bachelor’s degrees conferred in computer science over the last decade: 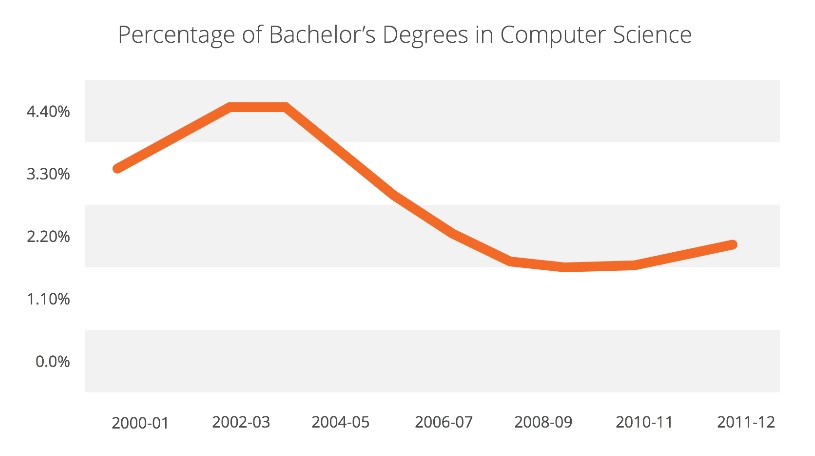 The NCES hasn’t published data for degrees conferred after 2013. Since the first coding boot camps were founded in 2011 and 2012, there’s no clear impact here, but note that computer science degrees had already seen a sharp decline since their peak in 2003.

An analysis of this NCES data by IT World concludes, “despite the red hot market for developers, it doesn’t seem that the rate at which undergrad students are choosing to major in computer science is increasing.” In fact, over roughly the same period of time that computer science degrees dropped, the tech sector experienced remarkable growth.

These market size estimates come from Course Report’s comprehensive survey of bootcamps like Dev Bootcamp and General Assembly. They show approximately 280 percent year-over-year growth for the bootcamp market. Notably, that number doesn’t include online programs like Bloc (my company) or Udacity; so the actual figure could be substantially larger.

The job outlook for software developers is growing at 22 percent, or “much faster than average,” according to the United States Department of Labor’s Bureau of Labor Statistics. And Robert Half Technology, one of the country’s largest tech staffing firms, says in its 2016 report that “employment offers are fiercely competitive: Above-market pay and other attractive financial incentives are common, and offers may include stock options, flexible work schedules, and other perks.”

From this data, we know:

What’s causing this shift? One possibility: Some employers may increasingly see computer science degrees as deficient in tangible skills. “University computer science departments are in miserable shape: 10 years behind in a field that changes every 10 minutes,” says Daniel Gelernter, CEO of tech startup Dittach, quoted in this recent Fortune article.

Though many employers agree with proponents like Gelernter about the staleness of CS curricula, they also argue that it’s difficult for a 12-week coding bootcamp to produce graduates of the same caliber as a four-year computer science program. Vocational training in web and mobile development meets the requirements for many employers, but companies with more sophisticated technology like Google need software engineers with greater depth in their field. Despite their reduction, it is unlikely that computer science degrees will go away entirely.

Barring another economic catastrophe, our best statistics indicate the gap between available developers and qualified candidates will continue to grow. This growth will continue “much faster than average” at least until 2022, according to a Department of Labor prediction. As the composition of software development education shifts towards these private programs, critics of coding bootcamps call for better quality and accreditation standards to protect against consumer fraud and abuse.

Regardless of what becomes of the attempts to standardize bootcamps with programs like EQUIP, as long as demand for software development skills continues to dramatically outpace the supply of qualified developers the need for multiple educational approaches will continue. Traditional computer science programs will only train a percentage of the necessary workforce, leaving alternative programs to fill in the gaps to serve an increasingly tech-dominated economy.

Roshan Choxi is CEO and cofounder of coding bootcamp Bloc.