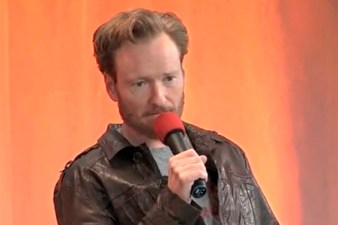 Late-night TV superstar Conan O’Brien’s 48-minute appearance at Google’s Mountain View headquarters last week has been helpfully edited down to the best five minutes by Valleywag. (Valleywag’s videos don’t have an embed button for dummies, so I’m linking to the clip rather than trying to figure out HTML source code at 8am.)

The famously quick-witted O’Brien, who recently left NBC’s Tonight Show and moved his staff from New York to Los Angeles in search of a new gig, agreed with the general consensus on Google’s campus that network television may not exist in a few years. He also talks about how he announced his career change with one tweet rather than an old-fashioned round of talk radio interviews.

But just as telling — and far funnier — are O’Brien’s spontaneous outbursts at Google Vice President of Engineering Vic Gundotra, and at the bizarre requests of Google staffers. O’Brien is repeatedly taken aback by the attitudes of Google employees. They ask him to do a dance onstage, and magnanimously treat him to a bottle of Kirkland water.

Google’s campus culture fosters technical innovation by boosting the prestige and self-esteem of its employees, especially the engineers. It’s a great hiring strategy, and the approach encourages novel ideas rather than Dilbert-esque corporate career maintenance. But yeah, it also results in an unintended air of self-entitlement toward outsiders: Do a dance, Conan! We make everyone do it.

Best moment is when a Googler walks up to a microphone placed in the audience to ask a question.

Conan: “Nope. You’ll have to combine them into one question.”

Conan: “Nooooooo, you’ll do better than that. This isn’t Yahoo, you know.”