Cooliris is launching a new version of its 3D wall today, one that makes it easier to explore images and other media on the web, on social networking sites, and now, even on your computer desktop. The Palo Alto, Calif. company is also announcing a $15 million second round of venture funding from previous backer Kleiner Perkins Caufield and Byers and others.

I saw a demo of the Cooliris version 1.10 a couple of weeks ago, and it definitely addresses many of my reservations about the service. I’ve always found the experience of flying through a wall of images, videos, or games to be impressive and even useful for scrolling through large amounts of content. But it’s not essential to my routine web browsing experience, especially since jumping back-and-forth between Cooliris and the standard browser view is a bit jarring.

But the company has been working to give the Cooliris experience more of the richness of normal web browsing. For one thing, Cooliris now lets you see an image or video’s metadata, not just the image itself. So if you use Cooliris to browse Google Image Search, for example, you can see the dimensions and file-type of each picture, and when you use it to browse YouTube, you can see the rating of each video (but apparently not the comments, thank God).

The company has also tweaked the Facebook photo browsing experience. Previously, you could browse individual albums, but now you can jump around between them by clicking on friends tagged in individual photos. That means you can explore Facebook photos in Cooliris without constantly jumping back to Facebook. 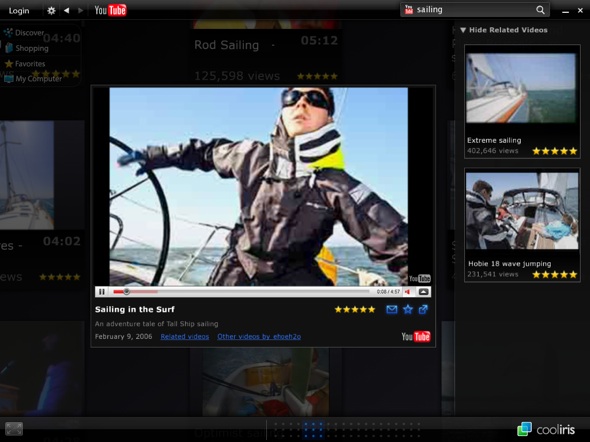 As a reporter, the new feature I’m most excited about is the improved interface for browsing news media in Cooliris’ Discover service, which is basically the startup’s equivalent of Google News. Previously, you just looked at images and videos from news sites, but once the new interface (which isn’t part of tonight’s release, but is coming soon) goes live, you can actually bring up the article, too, in what looks like a newspaper floating above the 3D wall. I haven’t really played with this feature, but it seems like a nice way to read the news — and, more important for newspapers struggling to make money from online ads, a richer environment for advertising.

Let’s just hope news organizations are smart enough to see Cooliris as an opportunity, not a parasite.

Lastly, Cooliris isn’t just about web browsing anymore. You can now use the same 3D wall to browse photos on your computer. Since virtually all my photos get posted online anyway, I’m not likely to use this feature, but for folks who have vast photo libraries on their hard drives, this should be quite useful and solidify Cooliris’ position as a single environment in which to view all types of media.

The company previously raised $3 million from Kleiner. The new investors include DAG Ventures, the Westly Group, and the T-Mobile Venture Fund. Cooliris says it’s still seeing strong traction, with tens of millions of downloads to date, and more than 50,000 new downloads per day.

(Update: There’s more discussion about Cooliris’ user growth in the comments. Basically, the 50,000-per-day number raised some eyebrows, particularly given traffic estimates for the Cooliris site, but the company says it stands by its numbers. For one thing, there are other places to download Cooliris, such as the Mozilla add-on page.)