D-Wave Systems today unveiled the roadmap for its 5,000-qubit quantum computer. Components of D-Wave’s next-generation quantum computing platform will come to market between now and mid-2020 via ongoing quantum processing unit (QPU) and cloud-delivered software updates. The complete system will be available through cloud access and for on-premise installation in mid-2020.

Binary digits (bits) are the basic units of information in classical computing while quantum bits (qubits) make up quantum computing. Bits are always in a state of 0 or 1, while qubits can be in a state of 0, 1, or a superposition of the two. Quantum computing leverages qubits to perform computations that would be much more difficult for a classical computer. Based in Burnaby, Canada, D-Wave has been developing its own quantum computers that use quantum annealing.

D-Wave is mainly focused on solving optimization problems, so its quantum computers can’t be directly compared to the competition. Indeed, many have questioned whether D-Wave’s systems have quantum properties, and thus performance that classical computers can’t match. In the meantime, D-Wave continues to improve and sell its systems.

In October, D-Wave launched D-Wave Leap, a cloud service for developers to run their open source applications on its quantum computers. Today, the Canadian company promised that you will also be able to run and build applications on the next-generation quantum computing platform by purchasing hours of use through Leap. That way, developers, researchers, governments, institutions, and businesses can access the D-Wave quantum system without breaking the bank.

The next-generation quantum computing platform relies on a new chip topology, Pegasus, which D-Wave promises is the world’s most connected commercial quantum system. While its predecessor, Chimera, offered six connected qubits, Pegasus more than doubles the number to 15. Having each qubit connected to 15 other qubits instead of six translates to 2.5x more connectivity, which in turn enables the embedding of larger and more complex problems with fewer physical qubits.

This animated GIF shows the evolution from the Chimera topology to Pegasus:

D-Wave’s 2000Q quantum computer launched in January 2017 with 2,000 qubits, doubling the size of its predecessor. The successor to 2000Q will do even more, with D-Wave expecting the next-generation platform to offer more than 5,000 qubits. This should give programmers access to a larger, denser, and more powerful graph for building commercial quantum applications. 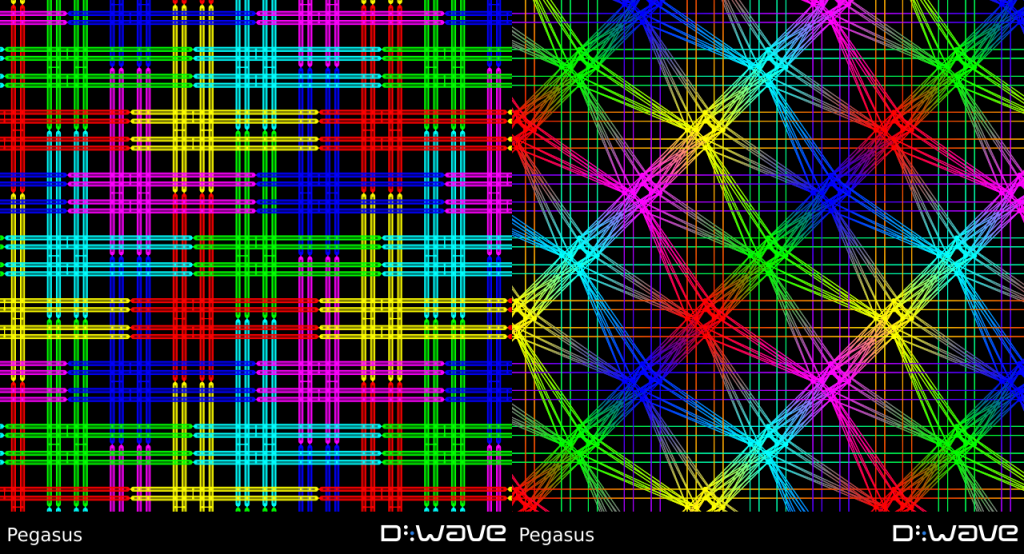 To ensure all these improvements can be leveraged appropriately, D-Wave will also be updating its hybrid software and tools. Developers can run both classical and next-generation quantum platforms in the hybrid rapid development environment using Python. They can also interrupt processing and synchronize classical and quantum tasks to draw maximum computing power out of each system.

The open source tools in D-Wave’s Ocean SDK are written in Python and C. The Ocean SDK now includes compilers for embedding problems on the new Pegasus topology. New components of the platform will be available through Leap.

“Quantum computing is only as valuable as the applications customers can run,” said D-Wave’s chief product officer, Alan Baratz. “With the next-generation platform, we are making investments in things like connectivity and hybrid software and tools to allow customers to solve even more complex problems at greater scale, bringing new emerging quantum applications to life. Every decision we’ve made and every decision we’ll make will reflect an ongoing commitment to helping developers learn quantum systems and helping customers build the first commercial quantum killer applications.”