Coiled, a DataOps and AIOps platform that seeks to increase access to scalable computing, today announced that it raised $21 million in series A funding led by Bessemer Venture Partners. Alongside the financing, Coiled unveiled Coiled Cloud, which lets data scientists build machine learning models using Python tools on a laptop, then transfer the model to any cloud environment to avoid vendor lock-in.

Enterprises‌ ‌have‌ ‌long struggled‌ ‌to‌ ‌collaborate‌ ‌well ‌around‌ ‌their‌ ‌data. This hinders their ability to adopt‌ ‌applications‌ ‌like‌ ‌AI, but the ‌evolution‌ ‌of‌ ‌‌DataOps‌ and AIOps ‌could‌ ‌solve that problem. Research firm Gartner calls them major trends encompassing steps in the data and machine learning lifecycles. DataOps is the automated, process-oriented methodology to improve the quality and reduce the cycle time of data analytics, while AIOps is the application of AI in IT operations — a combination of big data and machine learning.

Matthew Rocklin — the creator of Dask, a Python framework for deploying open source libraries like Pandas, NumPy, Jupyter, XGBoost, and Scikit-Learn — cofounded Coiled in 2020. He describes the New York-based company as the result of “deep collaboration” between enterprises in operations support systems and Python, with the goal of integrating Python and operations support systems into enterprise environments. 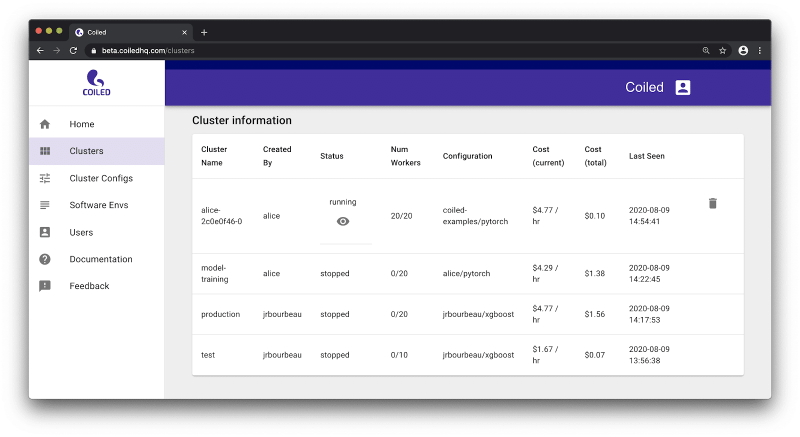 Above: Cluster information in the Coiled web interface.

“The Coiled team are passionate open source developers, maintainers, and advocates that are helping customers harness the power of distributed computing while making it easy and approachable,” Rocklin said in a blog post. “I started out as a scientist at Sandia National Labs and developed a deep respect and admiration for people who take on the complex challenges facing the world today in research, business, and science. Coiled exists to take complexity out of their day-to-day jobs so they can focus on solving those problems.”

Coiled Cloud, which runs primarily on Amazon Web Services, takes care of deploying containers, hooking up the requisite networking automatically. Coiled offers a web interface and Python environment that runs from other web services and automated jobs, managing GPUs and CPUs to allow mixing and matching with architectures and libraries such as Facebook’s PyTorch.

As for Coiled Enterprise, it runs in the cloud as well as on-premises and allows customers to work on their own personal devices as well as GPU servers in their infrastructure. Coiled Enterprise can create containers that can move between environments and manage server clusters — setting when the clusters run, for how long, how many processor cores each team member can use, and how long cores can be active. Coiled Enterprise also enables the sharing of work across team members and provides built-in telemetry and authentication to prevent unauthorized access and generate reports. 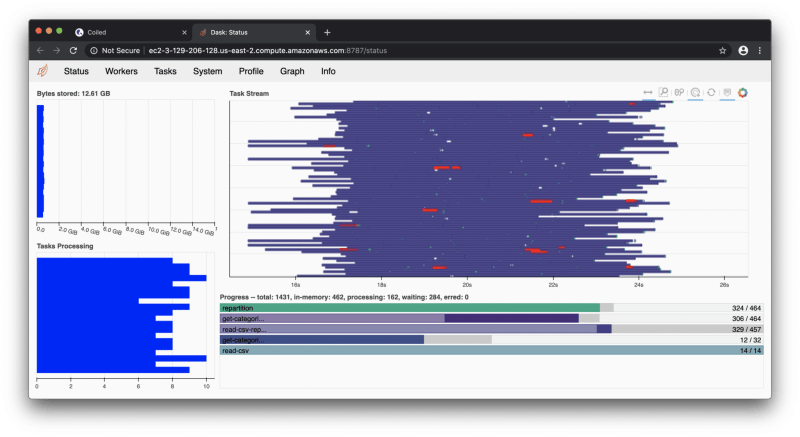 One Coiled customer, Zebra Medical Vision, says they were able to get an initial reduction across their data curation, automated experiments, and other pipelines from 66 hours to 15 minutes using Coiled products. To date, more than 100 million tasks have been hosted on Coiled, the startup claims, including from data science teams at Capital One and Anthem Health.

Coiled’s latest funding round, which saw participation from IA Ventures and FirstMark, brings its total raised to $26 million to date. Previously, the company closed a $5 million seed round led by Costanoa Ventures.