It looks like the era of humongous funding rounds isn’t completely over. Workday , a startup that provides online software to help companies manage things like human resources and finances, has raised $75 million in a fifth round of funding.

The Pleasanton, Calif. company was co-founded by Dave Duffield back in 2005, after he sold his previous startup, PeopleSoft, to Oracle for $10.3 billion. (Duffield is still the company’s chief executive, and remains the major stakeholder in the company.) Workday’s tools manage a range of functions at large companies, including human resources, payroll, finances, procurement, resource management, and business intelligence.

By providing those services through as a hosted online service (i.e., software-as-a-service, or SaaS), rather than an on-premise system, the company says it can respond more quickly to its customers’ needs and at a lower cost. There’s also the benefit of consolidating all of these features into a single system. Communications Director Andrew McCarthy tells me that for some companies, Workday is replacing as many as 80 systems worldwide. And it’s more user-friendly, he says, behaving “from an end user standpoint more like an Amazon or a Google than a big [enterprise resource planning system].”

Workday now has 80 customers, including Fortune 500 businesses. Signing up companies of that size is particularly impressive because we’re talking about core business functions, and enterprise-size corporations in particular have traditionally been hesitant about SaaS, due to concerns about reliability, lock-in, and security.  Competitors include Netsuite.

The company has raised a total of more than $150 million in funding, with a workforce of 340. The round was led by New Enterprise Associates (which contributed more than $45 million), with participation from previous backers Greylock Partners and Duffield himself. In an interview with PEHub, co-founder and President Aneel Bhusri, who is also a partner at Greylock, predicts Workday should break even in a year and a half and says the company is aiming for an IPO. 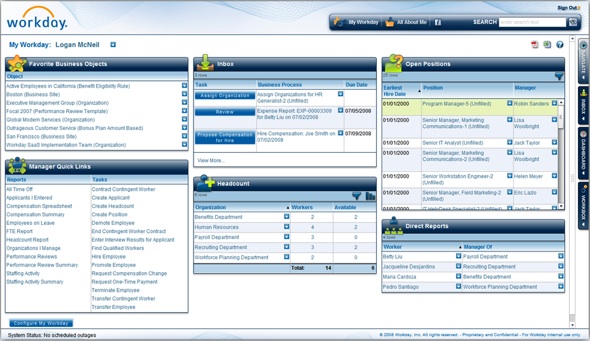