Dynamics is one of 70 companies chosen by VentureBeat to launch at the DEMO Fall 2010 event taking place this week in Silicon Valley. After our selection, the companies pay a fee to present. Our coverage of them remains objective. 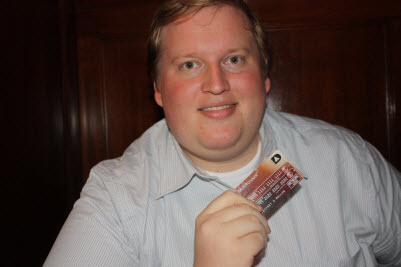 Americans have been using magnetic-stripe credit cards since the 1970s. But Dynamics hopes to upgrade them to computerized smartcards with better security and multiple accounts per card — without making any changes to the existing infrastructure of magnetic stripe readers in 60 million locations. The company is unveiling its solution, the Electronic Stripe, today at the DEMO conference.

The Electronic Stripe is the brainchild of 31-year-old Jeff Mullen (pictured right), chief executive of Pittsburgh, Pa.-based Dynamics. Mullen, who put himself through business school as he was starting his company in 2007, has recruited a crack team of payment specialists such as Philip Yen, a former executive vice president at Visa, and raised $5.7 million from Adams Capital Management. They have created a programmable magnetic-stripe card that lets banks change the functions of cards as they go. 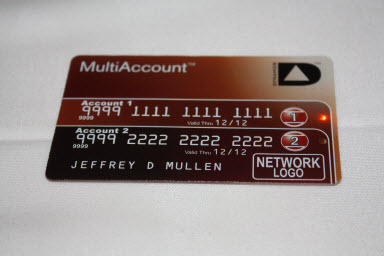 “We have built an efficient computer architecture and embedded it inside the cards,” Mullen said in an interview. “We call it Card 2.0. We think a card holder can have communication with their bank at the point of purchase. That’s where it’s going.”

For instance, if you press a button on one of Dynamic’s MultiAccount cards (pictured left), it will switch from one credit card number to a different one (and change the indicator light so you know which account is active). You can thus have multiple credit-card accounts from one bank, such as a personal account and a business account. The purchase is processed on Visa, MasterCard, or other card networks as a normal transaction.

For much of this year, Dynamics cards have been in stealth trials. The cards are actually thinner than credit cards and are both scratch resistant and waterproof. A single card can last more than three years on one battery charge. The company will reveal more details about the design later. The cards work in any kind of card reader, including motorized ATM card slots.

Dynamics stands a great chance at getting past the barrier of older infrastructure. Radio frequency identification tag (RFID) readers are being put in place in more places in order to accommodate electronic cards, but they still account for only about 3 percent of all of the readers in the market, even after billions of dollars in infrastructure investment. Another innovation, near-field communications, requires chips to be built into cell phones and it also means that merchants have to adopt new readers. But Dynamics’ strategy has the most benefit for the least pain. A programmable card fits with the strategies of a lot of banks, which are issuing different cards for loyalty programs or budget management.