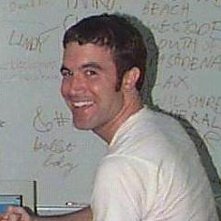 MySpace has just confirmed earlier reports that co-founder and chief executive Chris DeWolfe is planning to step down in the “near future.” The News Corp.-owned social network says he’ll continue to advise it, as well as serve on the board of MySpace China, a small Chinese-language affiliate (where he’ll serve alongside Rupert Murdoch’s wife, Wendi Deng).

Other reports have already pinned former Facebook executive Owen Van Natta as DeWolfe’s likely successor but MySpace isn’t commenting about any replacement yet.

DeWolfe, a source close to the company says, is also looking at “building and running something big again” (a startup?) and that “he has a few things up his sleeve” (so a few startups?).

What about Tom Anderson, the iconic MySpace cofounder and current president — the one (as pictured) who every one of MySpace’s millions of users is automatically made friends with when they join the site? He’s currently “in discussions” with new News Corp. digital media head Jon Miller about “assuming a new role in the organization,” according to MySpace.

The way the press release is phrased suggests that Anderson will also be taking a more advisory role in the near future (you can read it below).

But I’ve also heard that Anderson is looking to take more of product-focused job within MySpace — it’s not clear if that’s going to be a diminished advisory role or something more hands-on (I separately hear “it won’t be a big role”).

As I wrote earlier today, MySpace is facing Facebook — a company that has focused nonstop on product innovation. Keeping a founder close to MySpace’s product could be a good move, especially if a business-focused CEO like Van Natta takes over.

Los Angeles, CA, April 22, 2009 – MySpace CEO Chris DeWolfe and News Corporation’s Chief Digital Officer Jonathan Miller, announced today that, by mutual agreement, Mr. DeWolfe will not be renewing his contract and will be stepping down in the near future. Mr. DeWolfe will continue to serve on the board of MySpace China and will be a strategic advisor to the Company.

Additionally, Mr. Miller announced that he was in discussions with Tom Anderson, MySpace’s president, about Mr. Anderson assuming a new role in the organization.

“Chris and Tom are true pioneers and we greatly value the tremendous job they’ve done in growing MySpace into what it is today,” said Mr. Miller.  “Thanks largely to their vision, MySpace has become a vibrant creative community with 130 million passionate followers worldwide.  It is an enormously successful property and we look forward to building on its achievements with a new management structure we’ll announce in the near future.”

“In a little under six years we’ve grown MySpace from a small operation with seven people to a very profitable business with over 1,600 employees,” said Mr. DeWolfe.  “It’s been one of the best experiences of my life and we’re proud of, and grateful to, the team of talented people who helped us along the way.  We thank them, as well as the MySpace community for making our vision a reality.”

“From the very beginning, our driving passion has been simple – to create and foster a platform where people across the globe can not only meet and interact, but share music, videos, thoughts and ideas,” said Mr. Anderson.  I look forward to working with Jon.  I love this business, and look forward to its next chapter.”