A Bloomberg story about layoffs rising at tech companies has been making the rounds. It seems so counter-intuitive: How can job cuts be soaring when tech is booming?

Everyone seems surprised, but they shouldn’t be. Tech, more than any other industry, has succeeded in convincing us over the past two decades that workers are entirely disposable.

We throw out smartphones after two years. Replace our PCs every few years when they get slow. Why can’t we do the same with people?

“Despite the overall strength of the tech sector, employers in the computer industry saw the heaviest downsizing of the year, announcing a total of 59,528 planned layoffs. That is 69 percent more than a year ago.”

Shocking? Only if you haven’t been paying attention. Let’s look back at the historic numbers of U.S. tech job cuts from Challenger : 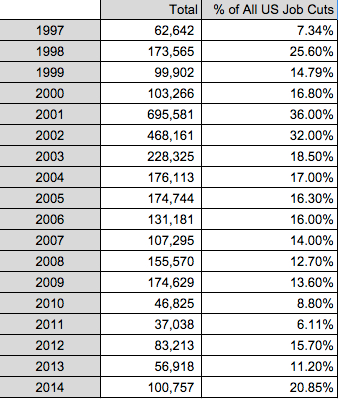 In Benner’s column, she focused on the “computer” industry numbers. But, in fact, Challenger defines the “tech sector” as computer, electronics, and telecom. In that larger definition, the 100,757 layoff announcements last year was up from 56,198 in 2013. Looking broadly at tech, layoff announcements from that sector increased almost 80 percent last year.

The good news, I suppose, is that these numbers are well below the post dot-com bubble era. I don’t believe we’re in a bubble now, but no matter, because it’s hard to imagine tech sector layoffs ever getting close to the 695,581 mark they hit in 2001.

But if you look before the dot-com bust (1997-1999) and the post-bust, pre-recession years (2004-2008), tech still represented an unusually large percentage of overall job cuts. In 1998, for instance, with the economy booming, and the tech bubble inflating, tech layoffs almost tripled to 173,565, about 25 percent of all layoff announcements in the U.S. that year.

Benner sums up many of the explanations that are commonly handed out for the tech industry’s exuberant human weed-whacking. Companies buy other companies and need to rationalize headcount. And there’s all that disruption. Big companies, in particular, are seeing their business models challenged by startups, so they need to shed employees with skills they no longer need, and hire people with the right skills.

“But I agree with them: It’s absolutely necessary for all of these companies to clean house,” Benner says. “They have to do it to change and, perhaps, survive.”

She adds: “But a big part of the industry is trying to revamp, catch up, and keep the market healthy — and they’re cutting jobs to get there.”

The notion here is that somehow these companies are backed into a corner, with no other option than to fire people. And that’s just not true.

These companies are making a choice. They’re deciding that it’s faster and cheaper to chuck people overboard and find new ones than it is to retrain them. The economics of cutting rather than training may seem simple, but it’s a more complex calculation than most people believe.

Firing people is not free. Back in 2010, I wrote a story about how Hewlett-Packard had announced 75,505 layoffs since 2002. As part of those cuts, the company had to pay $5 billion in severance pay. Since then, HP’s layoff count has climbed over 120,000 since 2002. It’s an amazing number for a company that remains profitable.

And how’s all that cutting working out? I don’t think anyone would argue HP is anything but still adrift.

But severance is not the only cost. There are intangibles, like morale. And there are other fiscal costs, like the price of recruiting and orienting new employees. There is a cost in time and money when you have to train new employees in your internal procedures and culture, get their computer hooked up, help them find the toilets, etc.

Many of these companies are churning through employees, laying off hundreds on one hand, while trying to hire hundreds more. Back in 2005, in another story I wrote, Adobe was busy shedding hundreds of jobs after acquiring Macromedia. But it also had 630 job openings. At the time, I spoke to one of Adobe’s lead recruiters who said they were having a hard time getting the word out about the job openings, because all the news was about the cuts. People they approached were wondering just how stable the company could be if it was firing all those people.

Writing in Newsweek back in 2010, Jeffrey Pfeffer, a professor in the Stanford Graduate School of Business, summarized the academic research that increasingly pointed to the failure of layoffs as a strategy. They don’t boost the stock price, as many argue. They don’t boost profits or productivity or even cut costs, he wrote.

“Some managers compare layoffs to amputation: that sometimes you have to cut off a body part to save the whole,” he wrote. “As metaphors go, this one is particularly misplaced. Layoffs are more like bloodletting, weakening the entire organism.”

Which all begs the real question: If layoffs don’t really work, why does everyone keep doing them, even in good times?

“Part of the answer lies in the immense pressure corporate leaders feel — from the media, from analysts, from peers — to follow the crowd no matter what,” Pfeffer said.

In other words, corporate leaders in tech lay people off because it’s what everyone else does. This is perhaps the saddest commentary on the tech industry. Rather than being full of mavericks, tech’s overuse of layoffs reveals it to be an industry led by people who are unable to think for themselves.