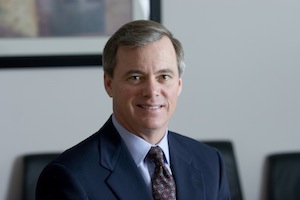 Electronic signature company DocuSign has a new chief executive — Steve King, who previously served as an executive at E-Trade and also led a number of online software startups.

Seattle-based DocuSign said it now holds 73 percent of the “eSign” market — namely, allowing businesses to replace hand-written signatures with electronic ones, so deals can be made and contracts can be sent online. The company has more than 20,000 customers, including American Airlines, Comcast, LinkedIn, and the National Association of Realtors, and says it has delivered more than 54 million signatures. (Competitor EchoSign says it has more than 14,000 customers.) King compared DocuSign with Zantaz, an email archiving company where he was CEO for seven years, and which was eventually acquired by enterprise search company Autonomy.

“There are a lot of parallels between Zantaz [when I joined] and DocuSign [now],” King said. “They were both the market leader, and they were both on the verge of a market that was about to become much larger.”

King said his goal is to “build on our market leadership position.” Vice President of Marketing Doug Wheeler added that the next step in electronic signatures involves “more than just the signature itself” — it’s not just who can deliver e-signatures, but also who can integrate that process with other applications.

In addition to naming a new CEO, DocuSign is also adding Keith Krach, founder and former CEO of now-public business software company Ariba, to its board of directors. Meanwhile, previous CEO Matthew Schiltz will lead the company’s strategic business development.